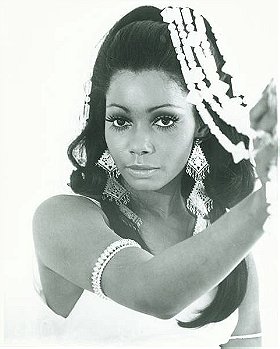 28 votes
Most beautiful women EVER and beyond (2647 items)
list by Scott Newman
Published 2 years, 6 months ago

Pace was born the second of two daughters in Los Angeles, California, to an airplane mechanic and a dressmaker. Pace's older sister Jean Pace Brown was an activist who was married to musician and actor Oscar Brown, Jr. After high school, Pace attended Los Angeles City College, majoring in sociology. Pace made her film debut as one of the title characters in William Castle's 13 Frightened Girls (1963). She got her first major break in Hollywood in 1968 as the first black villainess on TV with her role as Vickie Fletcher in the hit ABC-TV soap-opera/drama series Peyton Place. Also in 1968, Pace was singled out for praise by noted film critic Roger Ebert, for her performance in the popular youth-oriented film, Three in the Attic:

The find in this movie, for my money, is the young black actress Judy Pace, who is terrific. Variety calls her "the most beautiful black actress in Hollywood," which is debatable since beauty is in the eye of the beholder, etc., but she's a quick, funny actress who can put an edge on a line and keep a scene sparkling.

Pace quickly became a familiar face in the 1970s on both the big and small screens, appearing in popular blaxploitation movies and popular television shows. Television shows on which she appeared include Batman, Tarzan, Bewitched, I Dream of Jeannie, The Flying Nun, I Spy, The Mod Squad, That's My Mama, Kung Fu, Sanford and Son, What's Happening!!, and Good Times. For one season, she starred in the drama The Young Lawyers broadcast on ABC. Pace also had a key supporting role as Gale Sayers's wife, Linda, in the critically acclaimed 1971 ABC-TV movie Brian's Song.

In 1972, Pace married actor Don Mitchell. They had two daughters together before their divorce in 1984. Their daughters are actress Julia Pace Mitchell and Shawn Meshelle Mitchell. Pace had been courted by late baseball great Curt Flood in 1966 when he saw her as a bachelorette contestant on the game show The Dating Game. They dated until 1970. After divorcing Mitchell in 1984, Pace and Flood met again, leading to their 1986 marriage. They remained together until Flood's death in 1997. ... (more) (less)
Tags: Actress (1), Batman 66 (1)
My tags:

william maxey 83 added this to a list 3 months, 1 week ago
Tribute...Black Ladies of the golden cinema era (29 person items)

Scott Newman added this to a list 11 months, 1 week ago
Most beautiful women EVER and beyond (2647 beauty items)

coffee-boy voted for 8 images [View All] 3 years, 4 months ago

Dave voted for an image 5 years ago

TrekMedic voted for an image 5 years, 6 months ago

Atomic Cinema added this to a list 6 years, 2 months ago
Babes of Batman (113 person items)