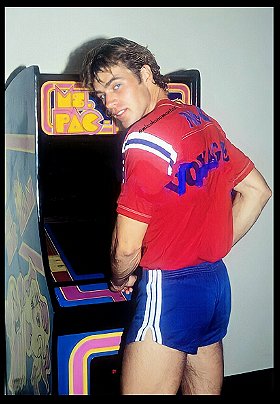 Hexum was born in Englewood, New Jersey, to Gretha and Thorleif Hexum, who were of Norwegian descent. He and his elder brother, Gunnar, were raised in Tenafly, New Jersey, by their mother after their parents divorced when Hexum was four. After graduating from high school, Hexum went on to Case Western Reserve University in Cleveland to study biomedical engineering. He soon left that university, however, and transferred to Michigan State University in East Lansing, Michigan. During that time, he worked as a radio disc jockey, played football on the 1978 squad, and acted in minor stage roles.

A few days after graduation, he moved to New York in 1980 to pursue his acting career. While working as an apartment cleaner, he met Bob LeMond of LeMond/Zetter Management, the manager of John Travolta. LeMond saw great potential in Hexum.
At LeMond's urging, Hexum relocated to Los Angeles in September 1981 to audition for a movie called Summer Lovers, which was to be directed by Randal Kleiser. Though he lost the part to Peter Gallagher, Hexum attracted the notice of Hollywood powerbrokers, and in short time was cast in the lead role of Phineas Bogg in the NBC series Voyagers!
Voyagers! aired during the 1982–83 television season, with Hexum's role earning him $10,000 a week. Unable to sustain itself against CBS's newsmagazine, 60 Minutes, Voyagers! was canceled after one season. Hexum's good looks and charm kept him marketable, however, and he was cast opposite Joan Collins in the made-for-television movie Making of a Male Model, also starring Jeff Conaway and Roxie Roker.

In 1984, Hexum guest-starred in an episode of ABC's prime time drama Hotel. He played Prince Erik, a Prince Charming-type character who sweeps his Cinderella off her feet.

After pondering several development deals, Hexum came upon a project he felt had possibilities: Cover Up. When the series began production in 1984, Hexum played Mac Harper, an undercover CIA operative posing as a male model, opposite co-star Jennifer O'Neill. Hexum described the role as part "Indiana Jones, James Bond, Mr. Magoo, and Superman." According to then-girlfriend, actress and singer Elizabeth "E.G." Daily, "He loved living this rich fantasy life. He was a big strong man, looked kind of like a Viking bodybuilder, and he loved to show his strength. He also liked the whole idea of guns and soldiers."

On October 12, 1984, the cast and crew of Cover Up were filming the seventh episode of the series, "Golden Opportunity", on Stage 17 of the 20th Century Fox lot. One of the scenes filmed that day called for Hexum's character to load bullets into a .44 Magnum handgun, so he was provided with a functional real gun and blanks. When the scene did not play as the director wanted it to play in the master shot, there was a delay in filming. Hexum became restless and impatient during the delay and began playing around to lighten the mood. Apparently, he had unloaded all but one (blank) round, spun it, and, apparently simulating Russian roulette with what he thought was a harmless weapon, at 5:15 p.m., he put the revolver to his right temple and pulled the trigger.

Hexum was apparently unaware that his actions were dangerous. Blanks use paper or plastic wadding to seal gunpowder into the cartridge, and this wadding is propelled from the barrel of the gun with enough force to cause injury if the weapon is fired within a few feet of the body should it strike at a particularly vulnerable spot, such as the temple or the eye. At a close enough range, the effect of the powder gasses is similar to a small explosion, so although the paper wadding in the blank that Hexum discharged did not penetrate his skull, there was enough blunt force trauma to shatter a quarter-sized piece of his skull and propel the pieces into his brain, causing massive hemorrhaging.

Hexum was rushed to Beverly Hills Medical Center, where he underwent five hours of surgery to repair his wounds.[6] On October 18, six days after the accident, Hexum was declared brain dead. With his mother's permission, his body was flown to San Francisco on life support, where his heart was transplanted into a 36-year-old Las Vegas man at California Pacific Medical Center. Hexum's kidneys and corneas were also donated: One cornea went to a 66-year-old man with cataracts, the other to a young girl. One of the kidney recipients was a critically ill five-year-old boy, and the other was a 43-year-old grandmother of three who had waited eight years for a kidney. Skin that was donated was used to treat a 3½-year-old boy with third degree burns. Hexum's body was then flown back to Los Angeles. He was cremated at Grandview Crematory in Glendale, California, and a private funeral was held. His ashes were scattered in the Pacific Ocean, near Malibu, California, by his mother.

Hexum's death was ruled accidental. His mother later received an out-of-court settlement from 20th Century Fox Television and Glen A. Larson Productions, the production team behind Cover Up.

The episode on which Hexum had been working was broadcast on November 3, 1984, two weeks after Hexum's death. Cover Up continued production without Hexum's character. Three weeks later, on November 24, Antony Hamilton was introduced as agent Jack Striker, posing as a new member of the modeling team. Hexum's character, Mac, is noticeably absent, said to be on another mission. At the end of the episode, Jack breaks the news that Mac has been killed on the other assignment and would not be coming back. As the tears flowed, the camera panned back, and a memoriam written by Glen Larson appeared onscreen:

4. Making of a Male Model

claymore1983 voted for an image 4 weeks ago

Campagnola posted a image 2 years ago

DearDean voted for 11 images [View All] 3 years, 1 month ago

nicolecole voted for 11 images [View All] 3 years, 1 month ago

babyjeanne voted for 11 images [View All] 3 years, 2 months ago

saharalara voted for 21 images [View All] 3 years, 2 months ago

DearDean voted for 10 images [View All] 3 years, 2 months ago

babyjeanne voted for 10 images [View All] 3 years, 2 months ago

nicolecole voted for 10 images [View All] 3 years, 2 months ago

tenaflyvoyager voted for 8 images [View All] 3 years, 2 months ago

saharalara voted for 21 images [View All] 3 years, 2 months ago

nicolecole voted for 21 images [View All] 3 years, 2 months ago

babyjeanne voted for 13 images [View All] 3 years, 2 months ago

DearDean voted for 21 images [View All] 3 years, 4 months ago