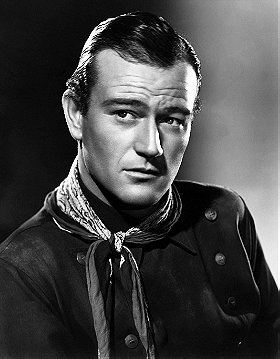 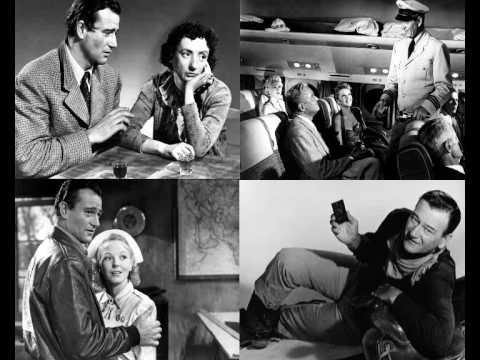 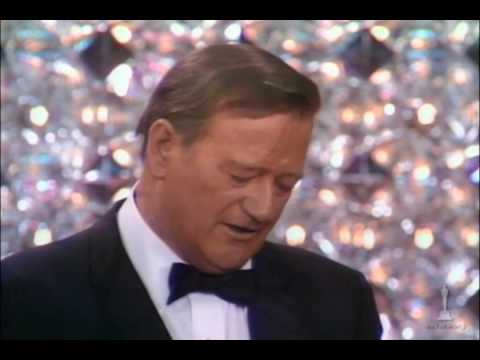 In 1939, Ford cast Wayne as the Ringo Kid in the adventure Stagecoach, a brilliant Western of modest scale but tremendous power (and incalculable importance to the genre), and the actor finally showed what he could do. Wayne nearly stole a picture filled with Oscar-caliber performances, and his career was made. He starred in most of Ford's subsequent major films, whether Westerns (Fort Apache [1948], She Wore a Yellow Ribbon [1949], Rio Grande [1950], The Searchers [1956]); war pictures (They Were Expendable [1945]); or serious dramas (The Quiet Man [1952], in which Wayne also directed some of the action sequences). He also starred in numerous movies for other directors, including several extremely popular World War II thrillers (Flying Tigers [1942], Back to Bataan [1945], Fighting Seabees [1944], Sands of Iwo Jima [1949]); costume action films (Reap the Wild Wind [1942], Wake of the Red Witch [1949]); and Westerns (Red River [1948]). His box-office popularity rose steadily through the 1940s, and by the beginning of the 1950s he'd also begun producing movies through his company Wayne-Fellowes, later Batjac, in association with his sons Michael and Patrick (who also became an actor). Most of these films were extremely successful, and included such titles as Angel and the Badman (1947), Island in the Sky (1953), The High and the Mighty (1954), and Hondo (1953). The 1958 Western Rio Bravo, directed by Howard Hawks, proved so popular that it was remade by Hawks and Wayne twice, once as El Dorado and later as Rio Lobo. At the end of the 1950s, Wayne began taking on bigger films, most notably The Alamo (1960), which he produced and directed, as well as starred in. It was well received but had to be cut to sustain any box-office success (the film was restored to full length in 1992).

During the early '60s, concerned over the growing liberal slant in American politics, Wayne emerged as a spokesman for conservative causes, especially support for America's role in Vietnam, which put him at odds with a new generation of journalists and film critics. Coupled with his advancing age, and a seeming tendency to overact, he became a target for liberals and leftists. However, his movies remained popular. McLintock!, which, despite well-articulated statements against racism and the mistreatment of Native Americans, and in support of environmentalism, seemed to confirm the left's worst fears, but also earned more than ten million dollars and made the list of top-grossing films of 1963-1964. Virtually all of his subsequent movies, including the pro-Vietnam War drama The Green Berets (1968), were very popular with audiences, but not with critics. Further controversy erupted with the release of The Cowboys, which outraged liberals with its seeming justification of violence as a solution to lawlessness, but it was successful enough to generate a short-lived television series.

Amid all of the shouting and agonizing over his politics, Wayne won an Oscar for his role as marshal Rooster Cogburn in True Grit, a part that he later reprised in a sequel. Wayne weathered the Vietnam War, but, by then, time had become his enemy. His action films saw him working alongside increasingly younger co-stars, and the decline in popularity of the Western ended up putting him into awkward contemporary action films like McQ (1974). Following his final film, The Shootist (1976) -- possibly his best Western since The Searchers -- the news that Wayne was stricken ill with cancer (which eventually took his life in 1979) wiped the slate clean, and his support for the Panama Canal Treaty at the end of the 1970s belatedly made him a hero for the left.

dennylaurent voted for an image 2 months, 2 weeks ago

Alix added this to a list 7 months, 4 weeks ago

MacGuffin voted for 8 images [View All] 11 months ago