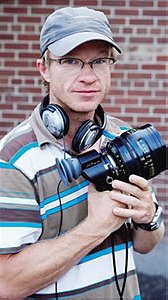 View all John Fawcett pictures
John Fawcett (born March 5, 1968) is a Canadian director of film and television. His best known films are the 2000 werewolf movie Ginger Snaps and the 2005 horror film The Dark. Most of his other work has been for television; he has directed episodes of many TV series, including Xena: Warrior Princess, Da Vinci's Inquest, Queer as Folk, Blade: The Series and Being Erica.
Tags: Canadian (1)
My tags:

4. The Man in the High Castle