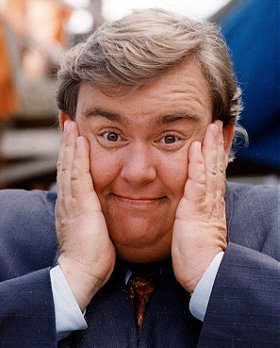 Born in Newmarket, Ontario, in the year 1950, Candy was the son of Evangeline (Aker) and Sidney James Candy. His mother was of Ukrainian and Polish ancestry. Candy found his passion for drama while attending a community college. In 1971 Candy made his TV debut in an episode of Police Surgeon (1971) co-starring Sharon Farrell, John Hamelin, and Nick Mancuso. Candy then found a number of bit parts in other Canadian television shows and also in such small films as Tunnel Vision (1976) and Find the Lady (1976). However, his big success came at the age of twenty-seven, when he became part of the comedy group "Second City" in Toronto. Alongside such soon-to-be Canadian stars as Catherine O'Hara (one of Candy's lifelong friends), Eugene Levy, Rick Moranis, and Harold Ramis, Candy was also part of the television show the group inspired. SCTV (1976) earned Candy a reputation for his quirky humor and his uncanny imitations of others.

After the television series, Candy appeared alongside fellow Canadian Dan Aykroyd in the Steven Spielberg flop 1941 (1979). However, other jobs followed and Candy landed a role, once again with Aykroyd, in the successful classic The Blues Brothers (1980). Candy played a parole officer who is part of the chase after Jake and Elwood Blues. The film was a hit and Candy followed up accordingly.

Candy acted in the smash hit Stripes (1981) where he played a dopey, overweight recruit affectionately nicknamed 'Ox'. After the success of Stripes (1981), Candy returned to the Second City with the other former stars, in SCTV Network (1981). Candy also hosted "Saturday Night Live" before landing himself a role in the Ron Howard film Splash (1984), a romantic comedy about a mermaid who washes ashore and learns to live like a human. Candy played a sleazy womanizing brother to the character played by Tom Hanks. The film was a bigger success than even Stripes (1981) and a number of people have said that Splash (1984) was his breakout role.

He took a second billing in the comedic film Brewster's Millions (1985) where a man must spend thirty million in order to inherit three hundred million from his deceased relative. Candy played the man's best friend, who accidentally gets in the way as much as helping out. Candy continued making films tirelessly, including the film Armed and Dangerous (1986) where he and Eugene Levy play characters who become security guards.

1987 was an especially good year to Candy, giving him two classic roles: Barf the Mawg in the Mel Brooks comedy Spaceballs (1987) and the bumbling salesman Del Griffith alongside Steve Martin's uptight character in the John Hughes film Planes, Trains & Automobiles (1987). The latter film is a golden classic and is one of Candy's greatest films. He followed up immediately with The Great Outdoors (1988), once again alongside Dan Aykroyd. Candy landed another classic role in the film Uncle Buck (1989) which was about a bumbling uncle who must look after his brother's three children.

Although he was in the smash hit Home Alone (1990), Candy's career fell into a slump, turning out unsuccessful films in the early nineties. This caused him to change his strategy by taking more serious roles. The first of these serious roles was the corrupt lawyer Dean Andrews in the 'Oliver Stone' film JFK (1991). The film was a big success, and Candy moved on from this victory to make the film Cool Runnings (1993) about the first Jamaican bobsled team.

Candy was well known for his size, six feet two and weighing around 300 pounds. However, he was very sensitive about the subject and in the nineties tried to lose weight and quit smoking. He was aware that heart attacks were in his family: both his father and his grandfather died of heart attacks and Candy wanted to prevent that happening to him as best he could.

In the mid-nineties Candy filmed the Michael Moore comedy Canadian Bacon (1995) then went to Mexico to film the western spoof Wagons East (1994). It was in Mexico that Candy had a heart attack and passed away in March 1994. Canadian Bacon (1995) was released a year after his death and is his last film.

1. Drunk Stoned Brilliant Dead: The Story of the National Lampoon

2. Hostage for a Day

1. Hostage for a Day

1. Hostage for a Day

Agent Kermit D. Fonz added this to a list 3 months, 2 weeks ago
Gone, but not forgotten (1219 person items)

Leo added this to a list 6 months, 3 weeks ago
Directed by Howard Deutch (66 person items)

Watchman voted for an image 10 months, 1 week ago

Libertine13 voted for an image 10 months, 1 week ago

Monstermaster added this to a list 2 years, 11 months ago

"Nathan's avatar form back in the Drmusic2 era, based on a drawing of his of a chubby yeti-like character."

Exclusive added this to a list 3 years, 8 months ago
My Favorite Actors: John Candy (17 movies items)

Exclusive voted for an image 3 years, 8 months ago

Dark Warrior added this to a list 3 years, 8 months ago

My Buddies Of Listal Portrayed As Funny Dogs (19 person items)

Marshall added this to a list 3 years, 11 months ago
favorite actress and actors (52 person items)

Dj Levels added this to a list 4 years ago
Comedians...Standup...Movie...Tv (261 person items)

carsdm added this to a list 4 years, 7 months ago
The Cast of SCTV (Second City TV) (23 person items)

Queen of Horror added this to a list 5 years, 3 months ago
Guests on Sesame Street (216 person items)

Queen of Horror added this to a list 5 years, 4 months ago