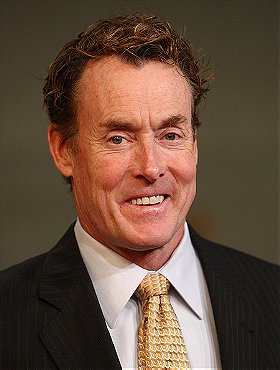 McGinley was born on August 3, 1959, in New York City. Growing up in Millburn, NJ, he was more involved in sports than theater. He began studying acting at Syracuse University, continuing at N.Y.U.'s Tisch School of the Arts. McGinley then toiled both on and off-Broadway, as well as two years on the soap opera Another World, scoring his first film role in the Alan Alda-directed Sweet Liberty (1986). It was while he was serving as John Turturro's understudy on the play Danny and the Deep Blue Sea that a casting scout in Stone's employ spotted him and got him an audition for Platoon. McGinley was cast as the sycophantic Sgt. Red O'Neill in the eventual Oscar winner.

McGinley followed up Platoon with another one-two punch of Stone movies, Wall Street (1987) and Talk Radio (1988). In interviews, McGinley has described theirs as a "strong working relationship," not a friendship per se with the demanding director. He appeared in a handful of other films before his fourth Stone collaboration, Born on the Fourth of July (1989), which was quickly followed by his first screenwriting effort. McGinley co-scripted and co-starred in the 1990 film Suffering Bastards, alongside Talk Radio's Eric Bogosian.

The 1990s were a period of intense work for the actor, who appeared in an average of three movies a year, sometimes as many as seven -- a necessary but no less tricky feat for a character actor earning modest paychecks. The most heralded of these were David Fincher's Seven and Stone's Nixon (both 1995); the most forgettable were Highlander II: The Quickening (1991) and the Steven Seagal starrer On Deadly Ground (1994). For most moviegoers, he remained under the radar.

Two showy roles in 1999 ably demonstrated McGinley's facility for comedy. As a callous efficiency expert brought aboard to reorganize (i.e., downsize) the tech firm at the heart of Office Space, McGinley grinned and joked his way through a round of heartless layoffs. A similar oiliness informed his loud, obnoxious, kiss-ass portrayal of a Jim Rome-type sports interviewer in Stone's Any Given Sunday.

It was soon after, in 2001, that McGinley was brought aboard for the role destined to identify him beyond any single film. As the default mentor on Scrubs, McGinley alternated hard-knocks frankness, biting wit, and a genuine desire to be left alone, in turn creating a hilarious persona and sealing his fate as an unwitting cult figure to the young surgeons. The sitcom work schedule has given him the necessary stability to spend time with his young son, Max, who has Down's syndrome.

Was born with a mild form of dyslexia.

Understudied for John Turturro in an off-Broadway production of John Patrick Shanley's Danny and the Deep Blue Sea, which led to his first big break when he was spotted by a scout for director Oliver Stone. He got a role in Platoon (1986), which was followed by several more Stone collaborations, including Wall Street (1987), Talk Radio (1988), Born on the Fourth of July (1989), Nixon (1995) and Any Given Sunday (1999).

Auditioned five times for the part of Dr. Perry Cox on Scrubs.

Actively involved in fund-raising activities for the National Down Syndrome Society (NDSS).

2. Battle of the Sexes

yellowhair voted for an image 2 weeks, 5 days ago

Leo added this to a list 1 year, 8 months ago
Directed by Howard Deutch (66 person items)

IsabellaSilentRose added this to a list 5 years, 4 months ago