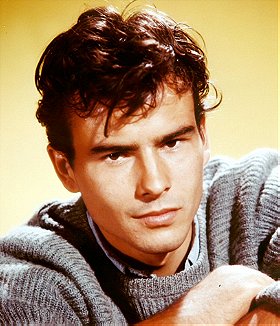 11 votes
What a wonderful actor he was! (25 items)
list by Haerry
Published 7 years, 2 months ago

Horst Buchholz was born in Berlin, Germany, in the year 1933. His father was a German shoemaker, while his mother was born to Danish parents. Buccholz was put in a foster home in Czechoslovakia when World War II broke out in Europe, but he returned to Berlin the moment he had the chance. Realizing his talent in acting, Buchholz dropped out of school to perfect his acting skills. After moving from East Berlin to West Berlin, he became well-known for his work in theatre and on the radio. In 1952 he turned to film, and after a series of small roles, he found a larger one in the Julien Duvivier film Marianne of My Youth (1955). He won a Best Actor award at Cannes for his role in the romantic/drama film Sky Without Stars (1955) by Helmut Käutner. However, it was the lead role in the comedic Confessions of Felix Krull (1957) that made him an established German actor.

He followed this breakthrough role with the romantic film Two Worlds (1958) and the thriller Wet Asphalt (1958), where the handsome young actor plays a former criminal who associates himself with a journalist. Now a familiar face in his country, Buchholz pursued making foreign films. His first non-German film was the British film Tiger Bay (1959). The film is about a girl who witnesses a seaman named Korchinsky (Buchholz) murder his girlfriend. The film won praise in both Germany and Britain, but it was Buchholz' next foreign film that secured his name in the history of classic films. This film was the epic western The Magnificent Seven (1960) directed by John Sturges. Buchholz played Chico, the inexperienced Mexican youth that wants to be a gunman and abandon his past. Buchholz starred alongside such legends as Charles Bronson and Yul Brynner. both of whom had strong European roots. The film was a hit, first in Europe, then was re-distributed in the States to a much higher profit. The film gained massive popularity, and even now is treasured as a classic.

Buchholz could now find good and steady work nationally and internationally, which is something few actors could do at the time. He worked on the romantic film Fanny (1961), which is based on a trilogy of plays written by legendary writer Marcel Pagnol. Buchholz plays the role of Marius, a passionate but unsure youth who must choose between the girl he loves, and the life at sea he has always wanted. The film was a fine success, nominated for five Oscars, including Best Picture and Best Actor for Charles Boyer (who plays Buchholz' onscreen father).

It was at this point in his film career where he was sought as the first choice to play the role of Sherif Ali in David Lean's legendary film Lawrence of Arabia (1962). However, Buchholz had to turn it down, as he had already signed up for another film, which turned out to be the Oscar-nominated comedy One, Two, Three (1961) (directed by Billy Wilder). The film was once again a fine success to add to Buchholz' career, but ultimately gained nowhere near as much of a status as David Lean's film. Buchholz also made the Italian film The Empty Canvas (1963) in which he plays an untalented artist who begins a love affair with a young model. Throughout his in the early 60s, Buchholz had made a name for himself, acting in one Oscar-nominated film after another and showing off his talent as an actor. However, the success he had reached was not to last.

Buchholz continued with film, including the James Bond spoof That Man in Istanbul (1965) and the crime film Johnny Banco (1967). He starred in the B-movie failure that was The Young Rebel (1967). Buchholz rebounded with the fiery film The Savior (1971) in which he plays a man who claims to be organizing resistance against the Nazis. He also played Johann Strauss in the Golden Globe-nominated musical The Great Waltz (1972). which was sadly another failure.

The rest of the 1970s and the early 1980s were spent mostly on television and movies released for television, whether it be foreign (Dead of Night (1977), Return to Fantasy Island (1978)) or German (Derrick). Buchholz found mild success again when he returned to the big screen with the WW II espionage film Code Name: Emerald (1985) in which he plays alongside such stars as Ed Harris and Max von Sydow. After this film, Buchholz returned to European movies, such as And the Violins Stopped Playing (1988) in which a group of gypsies flee Nazi persecutors. After taking a supporting role in the fantasy film Faraway, So Close! (1993), Buchholz acted in one of his most well known films: the Oscar-winning Italian film Life Is Beautiful (1997) which was directed by and starred Roberto Benigni. Buchholz played the role of a doctor who befriends Benigni's character and frequently duels with him in riddles. This choice of role proved to be an echo of Buchholz' taste in choosing his projects in earlier years; the film won best foreign film that year, and was also nominated for Best Picture. Thanks to his gift for languages, Buchholz was able to dub himself in the foreign releases of the film.

Linda Richter added this to a list 5 years, 7 months ago
My Favourite European Actors (203 person items)

mirinbuddy added this to a list 6 years, 7 months ago
My Top 100 Favorite Actors (102 person items)