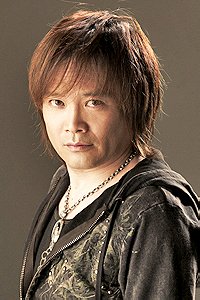 Kageyama gained notoriety for his opening songs of Hikari Sentai Maskman, Chōjin Sentai Jetman, and Dragon Ball Z. He is the original member and current leader of the anisong band JAM Project. Along with Masaaki Endoh, Kageyama hosted Anipara Ongakukan, a TV show aired on the Kids Station Channel that showed live performances of the theme songs of recent anime and tokusatsu shows. The show was canceled in 2017.

Kageyama is also the voice of Zaruba, a mystical talking ring, as well as the loyal ally and advisor to the titular hero of the tokusatsu franchise Garo, for which JAM Project has performed the opening themes. ... (more) (less)
Tags: Music (1), Japanese (1), Short (1), Singer (1), Jpop (1), Dragonball (1)
My tags: