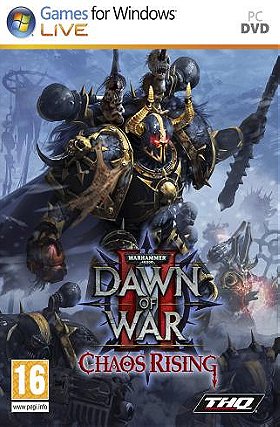 5 votes
Some gReaT games i played and liked very much! (48 items)
list by growl_kid
Published 12 years ago

Chaos Space Marines will be introduced in the game and all the races in the previous game (Space Marines, Eldar, Orks and Tyranids) will be given new units. [1]

Footage and trailers imply that the game will take place on an ice-covered planet called Aurelia. In the trailer, Gabriel Angelos explains Aurelia has been lost in the Warp for thousands of years, but has now reappeared, with signs of life on the surface. The trailer then goes on to show clips of combat between Space Marines (Warhammer 40,000) and renegade Chaos Space Marines. As the trailer ends, a Chaos Space Marine in Terminator armour, bearing the colours of the Black Legion, charges out and roars the game's tagline: "Your slavery to the False Emperor ends today!" ... (more) (less)
Release date: 31 December 1969
Tags: Warhammer 40K (1)
My tags:

Mirosan added this to a list 3 years, 11 months ago
Top RatedPC-Listal1STquarter2015 (885 games items)

Jake_The_Dog added this to a list 5 years, 7 months ago
Games Finished (261 games items)