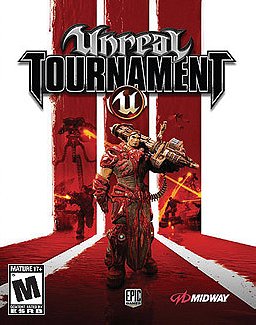 In the single-player campaign you take control over Reaper and fight in closed matches in the different available gameplay-modes against the Necris and other enemies of the Corporation. To convince your enemies that they are wrong, you will find the usual arsenal of known Unreal Tournament-weapons scattered around the map. These include the humiliating impact hammer, the Trident Tri-barrel Rocket Launcher and the devastating Redeemer. The famous Translocator is also back again to allow you fast movement around the maps. But it's not the only means of transportation in Unreal Tournament III.

Like in Unreal Tournament 2004 many maps also feature vehicles like the Axon Goliath or the Necris Darkwalker. In addition to that you also have at all time access to the new Hoverboard which allows you to travel fast but you can't use any weapons at the same time.There's also game-mode called Vehicle CTF where the different machines are essential in winning the round.

The other game-modes, which are all available in single player and multiplayer, contain the usual like Deathmatch and Capture the Flag but also the new Warfare-mode. In this mode you need to destroy the enemy Power Core. But the power core only becomes vulnerable when you've captured the Nodes leading to the core with power Orbs that spawn in your base. Warfare also replaces the popular Onslaught-mode known from the previous games. Bombing Run also didn't make it from Unreal Tournament 2004 into the new game. ... (more) (less)
Manufacturer: Midway
Release date: 19 November 2007
EAN: 0031719500611 UPC: 031719500611
Tags: Multiplayer (2), Fps (1), No_box (1), Epic Games (1), Steam (1), (1)
My tags:

dapkarte added this to wanted list 5 years, 1 month ago

Jake_The_Dog added this to a list 5 years, 8 months ago
Games Finished (261 games items)

Elusuariodiverso rated this 8/10 5 years, 8 months ago

ghostof added this to a list 6 years, 3 months ago
PC Gaming (286 games items)