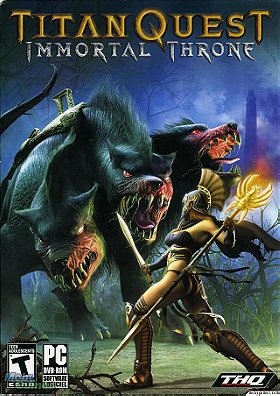 To do so the add-on Immortal Throne not only expands the level cap to 75 (+10 compared to the original game) but also adds a new mastery called "Dream". This mastery uses deceptions and illusions to seduce, disorient and, of course, kill enemies.

In the item department the expansion not only adds over 500 new items but also new types of objects such as arcane formulas which, once deciphered by a Enchanter, reveal how to make powerful artifacts which can be placed in the new slot in the character screen to increase the abilities. To make these artifacts, three reagents are needed, which can be everything from relics to other artifacts and scrolls.

Scrolls are new, too. They contain powerful one-time spells such as "Raise the Dead" or "Heal me completely". The last new item is the Gravestone. A Gravestone appears on the location where the hero is killed and when it is revisited, a large part of the lost experience points is regained.

The companion system has also been reworked. The player can assign different behavior patterns like Aggressive or Defensive to anyone. It is now also easier to control them as they can be selected either directly with the function keys, or marked as a whole group with a single key. The new companions are not the only new NPCs in the new and old world. There are also the Carvans and the already mentioned Enchanters. In the wagons of the Caravan items can be stored for later use when the available space in the inventory becomes scarce, similar to the chest in Diablo II. Items can then be accessed anytime and at any Outpost. The Enchanter not only deciphers arcane formulas but can also remove Relics from weapons and armor.

A few changes were made in the multiplayer part of the game. The most obvious is the overhaul of the lobby system. Open games now have detailed information shown including a list of the characters currently playing. Completely new is the possibility to activate PvP on a server to spice the action up a bit.

Someone added this to a list 2 years, 1 month ago
Video Games (1189 games items)