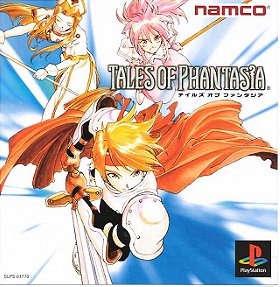 View all Tales of Phantasia pictures
Original released on the Super Famicom in 1995, Tales of Phantasia was re-released for the Playstation in 1998 exclusively in Japan. The remake runs on an enhanced Tales of Destiny engine and benefits from all the enhancements and refinements to the gameplay it had to offer. Many other changes, such as adding a fully animated anime style opening sequence, new sidequests, new spells, a new summon, a new playable character, and a more player-friendly battle encounter rate were also added.
Manufacturer: Namco
Release date: 23 December 1998
EAN: 4907892010574
Tags: Japan (1), Decent Games (1)
My tags:

Lildevil Jurinna added this to a list 1 month, 2 weeks ago
My favorite Playstation 1 Games (35 games items)

alenalena added this to wanted list 3 months, 1 week ago

Keollyn added this to a list 2 years, 3 months ago
Twitch (247 games items)

Paulo Júnior added this to a list 4 years, 9 months ago

"Above average for the time, with well-made story, good unique battle system, puzzles and the encounter rate, that was a problem in original SNES version, was fixed in the PS version. The fantranslation of this version is also more accurate to the original. "

Paulo Júnior added this to a list 4 years, 11 months ago

"An enhanced port of the SNES game."

Elusuariodiverso rated this 9/10 5 years, 11 months ago