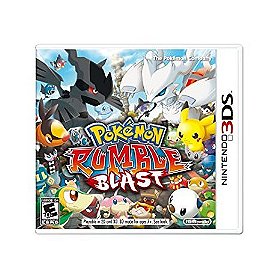 60 votes
All The Video Games I Have Beaten In My Lifetime (1128 items)
list by Silver Falcon Soul
Published 3 years, 6 months ago

As you advance through each stage in Pokemon Rumble Blast, your Toy Pokemon will face dozens of Pokemon at once in fast and furious real-time battles! You'll also run into giant Boss Pokemon, whose massive size and strength will make them especially tough to defeat and who can become powerful allies if you're lucky!

Pokemon Rumble Blast lets you connect wirelessly with your friends in two ways. You can use a local wireless connection to launch cooperative play mode, where you can team up to battle through levels and befriend defeated Toy Pokemon more easily. Or, you can use the StreetPass feature of the Nintendo 3DS system to challenge the Toy Pokemon collections of nearby players and to view other players' Mii characters in your game.

You can collect more than 600 kinds of Toy Pokemon in Pokemon Rumble Blast, including those from the recently released Pokemon Black Version and Pokemon White Version games. Switch between the various Toy Pokemon you collect to discover the strengths and weaknesses of each Pokemon. Plus, some of the Pokemon you befriend will have special stats and abilities! ... (more) (less)
Manufacturer: Nintendo
Release date: 25 October 2011
Number of discs: 1
EAN: 0045496741716 UPC: 045496741709
Tags: Nintendo (1)
My tags:

redComicsar added this to owned list 2 years, 10 months ago

Silver Falcon Soul added this to a list 3 years, 6 months ago

"This was an excellent to Pokemon Rumble it improved in everything the first one was lacking. You get to befriend pokemon from all the games. There is now a great storyline about gathering glowdrops that are stolen from a mysterious entity. Some of the moves have become stronger and the controls are much easier. There was alot more environments added as well and more detail was added to the map.Also new modes were added such as forts and charging and restrictions to the battle royale it kept thi"

theatricalis added this to owned list 5 years, 5 months ago

SomethingCoolIDK added this to owned list 5 years, 10 months ago

Elusuariodiverso rated this 7/10 6 years, 2 months ago