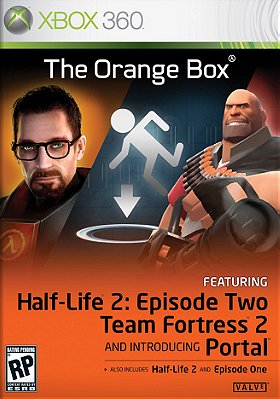 View all The Orange Box videos

The PlayStation 3 version was produced by Electronic Arts and released on December 11, 2007 in North America and in Europe. Valve has also released a soundtrack containing music from the games within the compilation.

The compilation contains five games, all powered by Valve's Source engine. Two of the games included, Half-Life 2 and its first stand-alone expansion, Episode One, had previously been released as separate products. Three new games were also included in the compilation: the second stand-alone expansion, Half-Life 2: Episode Two, the puzzle game Portal, and Team Fortress 2 (which is now a free-to-play game on Valve's PC platform Steam), the multiplayer game sequel to the original mod based on the Quake engine, Team Fortress and Team Fortress Classic on the original Half Life. A separate product entitled The Black Box was planned, which would have included only the new games, but was cancelled.

mynameisdoom added this to a list 1 year, 8 months ago
Juegos que Doomguy a Jugado (324 games items)

Paulo Júnior added this to a list 4 years, 1 month ago