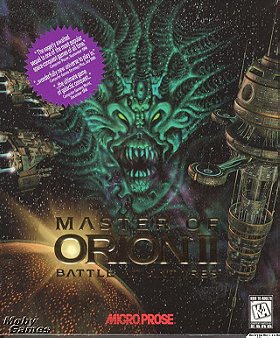 8 votes
Games I Have Played (460 items)
list by Fraterlucis
Published 7 years, 1 month ago

Master of Orion II: Battle At Antares is a turn-based 4x space empire game and is the sequel to Master of Orion, reinterpreting that game from scratch. Unlike the original the game can be played single player or with other human players. The player takes the role of a ruler of one of 8 races. They must manage planet resources to build ships and facilities, improving producion. Exploration of the galaxy is done via scouts and colony ships, which can establish new planets as part of the empire. Research must also be done to discover and utilize new technologies. Alien civilizations which are encountered can be negotiated with, or ships can engage in combat in a turn-based grid system. As new systems are explored, random events are triggered and strange artifacts found in orbit around unexplored planets. Wormholes can also be found which allow transport across dozens of parsecs into new star systems.

wczorajszy added this to owned list 3 years, 6 months ago

bonfancreativo added this to wanted list 5 years, 5 months ago

Elusuariodiverso rated this 8/10 5 years, 12 months ago