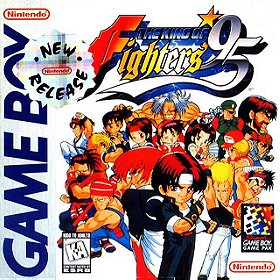 The King of Fighters '95 introduces Kyo Kusanagi's rival Iori Yagami, and firmly places Kyo as the main character for the rest of the series. The gameplay of The King of Fighters '95 is essentially unchanged from the previous title, though it does introduce the "team edit" concept which would remain as a standard feature of the series. Using the "team edit" feature, it is possible to create a totally customized team using any of the available fighters, or use one of the default teams if you wish. ... (more) (less)
Manufacturer: Nintendo
Release date: 26 April 1996
EAN: 0045496730581 UPC: 045496730581
My tags:

Gumtierl added this to wanted list 2 years, 10 months ago

José Lopes added this to list 3 years, 8 months ago