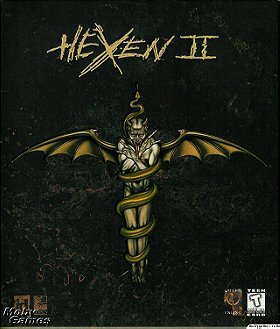 View all Hexen II pictures (9 more)
You are facing Eidolon, the last and strongest of three Serpent Riders, who has arrived from the out space of ether to devastate your homeworld. Choose from four character classes as a Paladin, Crusader, Assasin or Necromancer to fight across the four lands of Thyrion, confront the four Dark Generals of Eidolon, the four Riders of Apocalypse, and a final showdown with the Serpent Rider himself in an FPS developed by Raven Software, based on a heavily-modified Quake engine. This game is unique such that it includes a slight touch of RPG in the FPS gameplay as your character progess in level and statistics when defeating monsters.
Manufacturer: Activision
Release date: 31 August 1997
Number of discs: 1
EAN: 5030917001048
Tags: Fps (1), PC (1), First Person Shooter (1), Finished (1), Steam (1)
My tags:

Mirosan added this to a list 3 years, 8 months ago
Top RatedPC-Listal1STquarter2015 (885 games items)

Exclusive added this to a list 5 years, 9 months ago
My Steam Collection (381 games items)

Dragonfly added this to owned list 5 years, 9 months ago