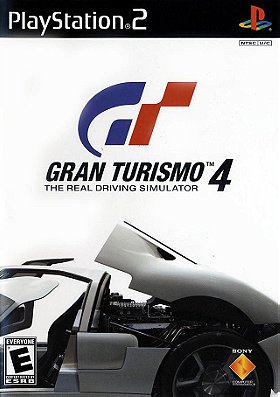 First up, Gran Turismo 4 is bigger and better than previous games in the record-breaking series. Much bigger, in fact: there are some 500 cars to drive, and around 100 courses on which to take those motors for a spin. Every single car is a perfectly modelled replica of its real-life equivalent, containing much more detail than the car models found in Gran Turismo 3. And it shows: thanks to this increased level of detail, GT4 edges the series ever closer to photorealism.

By far the biggest of Gran Turismo 4's many attractions is its online play. Over the Internet or using a local area network of PS2 consoles, it will be possible for six people to meet and race, each with their own cars. The prospect of an online Gran Turismo community is certainly something to look forward to.

LittleRedCorvette added this to a list 1 year, 4 months ago
Video Games (42 games items)

harlemquinn added this to a list 4 years, 9 months ago
My PS2 Collection (141 games items)

TheUmbrellaMan added this to a list 5 years ago
My Playstation 2 Game Collection. (47 games items)

Bob Fish added this to a list 6 years, 1 month ago
Videojuegos (96 games items)