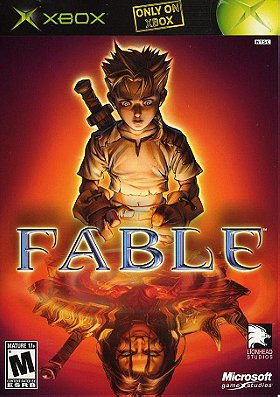 Fable is a 3rd person RPG that casts the player as "the child" or "the hero" who must perform various deeds to graduate from the Heroes Guild and define themselves. Generating a new character, players will go through the Guild's training, and become an adult, thrown into the world to make one's own decisions.

Fable has a "good and evil system", similar to Star Wars: Knights of the Old Republic. Various situations, for example coming across a child being bullied, will force the player to make decisions which ultimately shape their character. Making decisions deemed "good" and morale earns the player good points, while being selfish and "bad" earns evil points instead. These decisions not only alter character stats, but also the hero's appearance and even the environment around them. "Evil" characters tend to look the part; growing horns, receiving scars and having a swarm of flies buzzing around him. A "good" character on the other hand might receive a halo and have butterflies swarming. However other actions such as receiving wounds in combat or casting large amounts of magic also affect the player's appearance. Actions also end up impacting the player's reputation, including actions that might be relatively unimportant in other games. For instance, if a player kicks a lot of chickens, various people might start referring to them by the title of "Chicken Kicker" or using "good alignment" magic might cause people to start calling the hero "Runemaster" instead.

There are two main modes of combat in Fable: melee and magic. The Hero can equip any number of weapons, from swords to axes, and a variety of spells to either harm or help. What the hero wears also determines how people interact with them. Bright, saintly armor tends to make townspeople more willing to talk, while carrying a large axe and blood-red, darkened armor, might cause them to be more apprehensive.

Fable has an experience upgrade system that allows players to specialize in one area, or spread throughout, to give the hero a more all-around set of abilities. There are three areas in which experience is gained: Physical, Skill and Will. Physical experience is earned primarily by using melee weapons and can be used to upgrade the hero's strength or health. Skill experience is primarily gained through archery or trading and boosts archery prowess, speed or guile. Will experience is gained through magic usage and is spent on new spells or upgrading old ones. ... (more) (less)
Manufacturer: Microsoft
Release date: 7 October 2004
Number of discs: 1
EAN: 0805529493346 UPC: 805529493346
Tags: RPG (12), Fantasy (5), Xbox (4), Big Blue Box (4), Action (3), Third Person (3), Fable (3), Lionhead (3), Peter Molyneux (3), Magic (2), Series (2), Action Rpg (2), Plot (2), Medieval Fantasy (2), Semi-linear (2), Xbox 360 Compatible (2), Microsoft Game Studios (2), Third-person (2), Fable Series (2), Xbox Exclusive (2)
My tags:

bakumbicum added this to a list 2 years, 2 months ago
Games with the possibility of LGBT romance (62 games items)

bakumbicum added this to a list 2 years, 2 months ago
Games where your choices define history (70 games items)

Alex Roussel added this to a list 3 years, 3 months ago
My Steam library (182 games items)

Alex Roussel added this to a list 3 years, 3 months ago
My Steam library (182 games items)

harlemquinn added this to a list 4 years, 3 months ago
My Xbox Collection (21 games items)

Jake_The_Dog added this to a list 5 years, 4 months ago
Games Finished (261 games items)

Lightning Francis added this to a list 6 years, 2 months ago
Top 100 Games of the 6th Generation (100 games items)