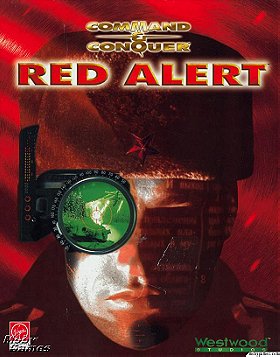 Starting in the "real world" of 1946 at the Trinity site in New Mexico, the opening to Red Alert shows Albert Einstein preparing to travel backwards through time. After the time machine is activated, he appears in Landsberg, Germany, in the year 1924, where he meets Adolf Hitler just after his release from prison. After a brief conversation, Einstein shakes Hitler's hand, eliminating the man and returning Einstein to his time of origin. Upon Einstein's return to New Mexico in 1946 he finds his time altered beyond repair, and Red Alert's storyline has begun to take place in the early history of the Tiberian universe[2].

With the threat of Nazi Germany removed from history, the Soviet Union began to grow increasingly powerful under the rule of Joseph Stalin. Had Hitler risen to power, Germany would have emerged as the balancing force standing in the way of Stalin's ambitions. Instead, left unchecked, the Soviet Union proceeds by seizing lands from China and then begins invading Eastern Europe in order to achieve Stalin's vision of a Soviet Union stretching across the entire Eurasian landmass. In response to this, the nations of Europe form into an Alliance, and start a grim guerrilla war against the Soviets. Over the course of the game, the Allies and Soviets fight a prolonged conflict for control of the European continent. ... (more) (less)
Manufacturer: Electronic Arts
Release date: 31 October 1996
Number of discs: 1
EAN: 0014633118735 UPC: 014633118735
Tags: Strategy (6), RTS (5), Sci-fi (5), Westwood (4), 1996 (3), C&C (3), Finished (2), Developed By Westwood (2), MS-DOS (2), Electronic Arts (2), Real-Time Strategy (2), Real-time (2), Sequel (2), Warfare (2), Nostalgia (2), PC (2), War (2), Westwood Studios (1), (1)
My tags:

Mirosan added this to a list 3 years, 1 month ago
Top RatedPC-Listal1STquarter2015 (885 games items)