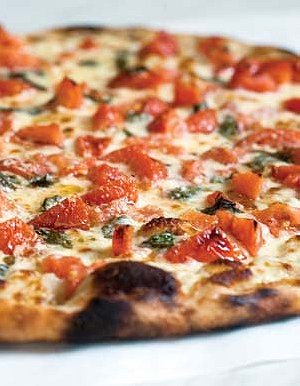 Iceviper
8 votes
Some of the best apizza I've ever had has come from Pepe's. Although I'm southern Italian decent and my families home made pizza is more the "Sici" (thick crust) style, Pepe's is absolutley fabulous. If you are ever in the area of any of the pizzerias, stop by and try one. You won't regret it. (A couple of ice cold 'Peroni's" go well with the apizza!)

View all New Haven-style pizza reviews
New Haven-style pizza, locally known as apizza, is a style of Neapolitan pizza common in and around New Haven, Connecticut. It originated at the Frank Pepe Pizzeria Napoletana[1] and is now served in many other pizza restaurants in the area, most notably, Sally's Apizza, Bar Bru Room, Grand Apizza, and Modern Apizza. This geographically limited pizza style has gained considerable culinary and historical importance.[2][3][4]

In a New Haven-style pizzeria a "plain" pizza is crust, oregano, and tomato sauce with a little bit of grated pecorino romano cheese sprinkled on. Mozzarella(known as "mootz" in the local Italian dialect) is considered to be a topping; a customer who wants it must ask for it.
Later on, Pepe invented the "white clam pie." Pepe's restaurant used to serve littleneck clams on the half shell at the bar which he eventually decided to put on the pizza.[5] The white clam pie is crust, olive oil, oregano, grated cheese, chopped garlic, and fresh littleneck clams.
What makes New Haven style pizza distinct is its thin, oblong crust, characteristic charring, chewy texture, and limited use of melting cheeses. It tends to be drier and thicker than, but closely related to traditional New York style pizza. Both styles in turn are close descendants of the original Neapolitan style.

New Haven-style pizza is traditionally baked in a coal-fired oven[6] and is sold whole rather than by the slice.

Although most commonly available in the New Haven area, New Haven-style pizza has begun to spread to other parts of Connecticut. It has been available in the Italian-American areas of Bridgeport and other shoreline communities for many years. It is beginning to be served in areas typically not known for large Italian-American populations, including towns in northern and central Connecticut as well as farther away in Hood River, Oregon,[7] Washington, DC,[8] Chicago, Illinois,[9] San Diego, California,[10] West Chester, Pennsylvania,[11] Key West, Florida,[12] Austin, Texas,[13] and Farmington Hills, Michigan.[14]

TrekMedic added this to wanted list 2 years, 9 months ago