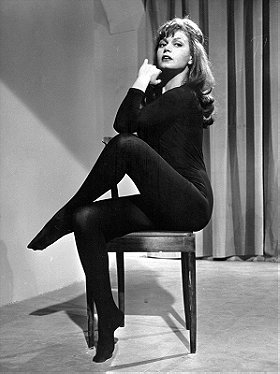 Having survived the horrors of Nazism and World War II, she found her vocation in acting but was soon threatened and persecuted by the new Communist regime. Hollywood-based producer Alexander Paal helped her escape from Hungary by marrying her and taking her to England, where she made her screen debut in Paal's production of A Tale of Five Women (1951), filmed in 1948 but shelved for several years due to financial difficulties. After divorcing Paal, Eva received valuable support from film mogul and fellow Hungarian expatriate, Alexander Korda, who was then-president of MGM-England. He placed her under contract to London Films which provided a small salary, an English language coach and the opportunity to audition for developing film projects at the studio.

In spite of this, Eva spent months without finding real work and was becoming quite desperate. William Wordsworth, a public relations man who became her third husband, suggested that she attend as many premieres and theater opening nights as possible in order to bring attention to herself. Unable to buy the proper wardrobe and accessories to make a decent showing at these social gatherings, Eva began designing and making her own gowns and hats from pieces of cheap materials. Soon the media took notice of this beautiful brunette dressed in weird costumes and Eva Bartok became a local celebrity. The publicity caught the eye of an Italian promoter who offered Eva a contract to perform in a vaudeville show. With Korda's permission, Eva flew to Italy and had great success on the stages of Milan, Florence and Rome. Meanwhile, in England, the film, A Tale of Five Women (1951) had finally reached movie houses and was seen by producer-actor Burt Lancaster, who was looking for a leading lady for his next film, The Crimson Pirate (1952). Impressed by Eva's beauty and talent, he wired her in Italy and she accepted promptly, sensing the importance of the project.

After working in this film, Eva is perceived as a real movie queen but some of her next vehicles are not what you would expect from a rising superstar. It is understandable that Eva was a young woman marked by horrendous experiences which might explain the fact that, over time, she would become more concerned with spirituality than with the quality of the projects she took on all over Europe. Somehow, this did not prevent her from becoming more famous for her off-camera antics than for her screen work. For a long time, she seemed to be divided between her image as a glamorous carefree playgirl among the European rich and a real human in desperate need to find the meaning of her own existence.

Her filmography in the 1950s is prolific both in England and in Germany but it includes a lot of low-budget turkeys (now "cult classics"), some decent vehicles and a few top productions. She also made a series of films that paired her with popular actor-director, Curd Jürgens, who became her fourth husband. Besides her work in movies, she appeared on London stages and television. After turning down a Hollywood contract in 1956, Miss Bartok found herself in a serious health crisis. An Indonesian mystic helped her out of this predicament with a new spirituality called Subud. Miss Bartok was successful in giving birth to a "miraculous" baby girl in 1957 (see 'Deana Jürgens') and, from then on, seems totally committed to Subud although she makes half a dozen more films before retiring from movies altogether in 1967 at age 40. In later years, she revealed that daughter Deana had been fathered by Frank Sinatra but the claim went ignored by Sinatra and family. She continued her Subud activities during residencies in Indonesia, Hawaii, San Francisco, Los Angeles and London where she died quietly in 1998. (IMDB) ... (more) (less)
Tags: Died 1998 (2), Born 1927 (2), Died Aged 71 (1), Hungarian (1), Gorgeous (1), Beautiful (1), Icon (1), Actress (1)
My tags:

Henny voted for 5 images 1 week ago

Kendraatje posted a image 6 months ago

Kendraatje voted for 8 images [View All] 9 months, 3 weeks ago

giannicorso73 voted for 2 images 3 years ago

hulkargh voted for an image 3 years, 10 months ago

ciollini voted for an image 3 years, 11 months ago

parryj voted for an image 4 years, 2 months ago