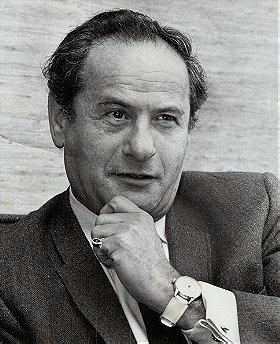 Wallach's film debut was in Elia Kazan's controversial 1956 Baby Doll, and he went on to a prolific career in films, although rarely in a starring role. Other early films include The Lineup, The Misfits, The Magnificent Seven, Lord Jim, a comic role in How to Steal a Million, and perhaps most famously, as Tuco (the 'Ugly') in Sergio Leone's The Good, the Bad and the Ugly. After the latter's success, Wallach appeared in several other spaghetti westerns, including Ace High.

Wallach in Baby Doll trailer, 1956
Wallach is central to one of the most infamous show business legends. In 1953 he was cast as Angelo Maggio in the film From Here to Eternity, but was abruptly replaced by Frank Sinatra before filming began. Sinatra went on to win an Oscar for the performance, which revived his career. Sinatra purportedly used pressure from his underworld connections to get the part, an incident that inspired the Johnny Fontane character in the classic 1972 film The Godfather. To spare Sinatra embarrassment, Wallach says he turned down the role to appear in a Tennessee Williams play, claiming: "...[w]henever Sinatra saw me, he’d say, 'Hello, you crazy actor!'

In 2006, Wallach made a guest appearance on the NBC show Studio 60 on the Sunset Strip, playing a former writer who was blacklisted in the 1950s. His character was a writer on The Philco Comedy Hour, a show that aired on a fictional NBS network. This is a reference to The Philco Television Playhouse, in several episodes of which Wallach actually appeared in 1955. Wallach earned a 2007 Emmy nomination for his work on the show.

Before accepting a role as a villain in Leone's Once Upon a Time in the West, Henry Fonda called Wallach and asked "What the hell does he [Leone] know about the West?" Wallach assured Fonda he would be pleasantly surprised if he accepted the role. After the film's success, Fonda called Wallach back to thank him.[citation needed]

Wallach and Leone had built a good relationship during shooting The Good, the Bad and the Ugly, but had a falling-out later on. Leone had asked Wallach to play a role in his upcoming film, A Fistful of Dynamite, but the actor explained he had a scheduling conflict. After much pleading, Wallach finally relented and turned down the other offer and waited for Leone to raise enough Hollywood money for the picture. However, the studio Leone went to had an actor, Rod Steiger, with one more picture in his studio contract and the studio announced that Leone would have to use him if they were to put up any financing. Leone then called to apologize to Wallach, who remained dumbstruck on the other end of the line. After even refusing to give Wallach a token payment for losing out on two jobs, the actor said, "I'll sue you"—to which Leone replied, "Get in line", and slammed down the phone. In his autobiography, Wallach relates the incident as regrettably being the final time the two spoke to one another.

Wallach played Mr. Freeze in the 1960s Batman television series. He wrote in his autobiography that he received more fan mail about his role as Mr. Freeze than about all of his other roles combined.

2. The Roosevelts: An Intimate History

Agent Kermit D. Fonz added this to a list 3 months, 2 weeks ago
Gone, but not forgotten (1513 person items)

milica added this to a list 4 months, 4 weeks ago

powerking14 voted for an image 3 years ago

hulkargh added this to a list 6 years, 1 month ago
Favorite Actors (42 person items)

Kandi voted for an image 6 years, 3 months ago