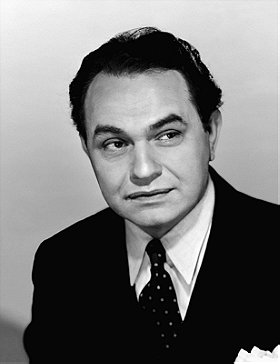 Born Emanuel Goldenberg in Bucharest, he emigrated with his family to New York in 1903. He attended Townsend Harris High School and then City College of New York, but an interest in acting led to him winning an American Academy of Dramatic Arts scholarship, where he changed his name to Edward G. Robinson (the G. signifying his real name). He began his acting career in 1913 and made his Broadway debut in 1915. He made his film debut in a very minor and uncredited role in 1916; in 1923 he made his named debut as E. G. Robinson in The Bright Shawl. One of many actors who saw his career flourish in the new sound film era rather than falter, he made only three films prior to 1930 but left his stage career that year and made fourteen films in 1930-32. He married the actress Gladys Lloyd in 1927.

A sensational performance as the gangster Rico Bandello in Little Caesar (1930) led to him being typecast as a 'tough' for much of his early career in works such as Five Star Final (1931), Tiger Shark (1932), Kid Galahad and A Slight Case of Murder (1938). In the 1940s, after a good performance in Dr. Ehrlich's Magic Bullet (1940), he expanded into edgy psychological dramas including Double Indemnity (1944), The Woman in the Window (1944) and Scarlet Street (1945); but he continued to accept gangster roles such as that of Johnny Rocco in the classic Key Largo (1948), one of five films he made with Humphrey Bogart. He was a popular box-office draw and was able to avoid flops.

In the 1950s he was called to testify in front of the House Un-American Activities Committee, where he was cleared of all suspicion. In 1956 he had to sell off his large art collection for $3.25 million as part of his divorce settlement with Lloyd. That same year he returned to Broadway in Middle of the Night.

1. Magician: The Astonishing Life and Work of Orson Welles (2015)

napier added this to a list 1 year, 6 months ago

They had to change their names (15 person items)

darthjoker12 added this to a list 5 years, 5 months ago

giannicorso73 voted for an image 6 years, 1 month ago