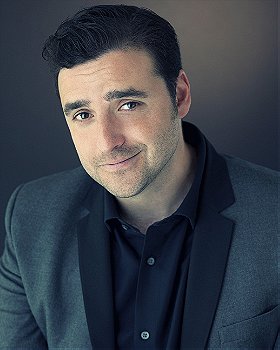 1 vote
View all David Krumholtz pictures
Description: Youthful character actor David Krumholtz received his start largely due to his resemblance to another established actor, but it was his natural ability and persevering work ethic that made him one of the more steadily employed actors of his generation. After being cast as Judd Hirsch's son in the Broadway drama "Conversations with My Father," he began picking up film work in features like "Addams Family Values" (1993) and "The Santa Clause" (1994). Early efforts to be cast in a successful television series failed to pan out, as was the case with the ill-fated "Chicago Sons" (NBC, 1996-

Youthful character actor David Krumholtz received his start largely due to his resemblance to another established actor, but it was his natural ability and persevering work ethic that made him one of the more steadily employed actors of his generation. After being cast as Judd Hirsch's son in the Broadway drama "Conversations with My Father," he began picking up film work in features like "Addams Family Values" (1993) and "The Santa Clause" (1994). Early efforts to be cast in a successful television series failed to pan out, as was the case with the ill-fated "Chicago Sons" (NBC, 1996-97). Thankfully, these disappointments were balanced by noteworthy turns in respected films like Ang Lee's "The Ice Storm" (1997) and even more prominently in "The Slums of Beverly Hills" (1998). Well regarded by his peers, Krumholtz could frequently be seen making cameos on shows such as Judd Apatow's "Freaks & Geeks" (1999-2000) and "Undeclared" (FOX, 2001-02), but attempts to join the permanent cast of a successful series, as in "The Lyon's Den" (NBC, 2003-04), continued to elude him. Nonetheless, Krumholtz made his presence known with hilarious cameos in films like "Harold & Kumar Go to White Castle" (2004) and "Serenity" (2005). His persistence paid off, however, when he was cast on the hit crime drama "Numb3rs" (CBS, 2004-2010), opposite Rob Morrow. Even after the series ended its successful run, Krumholtz remained the epitome of the working actor, straddling the mediums of film and television with equal dexterity.

Born on May 15, 1978 in Queens, NY to mother Judy, a dental assistant, and father Michael, a postal worker, Krumholtz was never particularly interested in acting. But in the early 1990s, New York seethed with want ads for child actors. At the urging of his mother, he and several friends answered a casting call for an upcoming theatrical venture. Amazingly, the 13-year-old Krumholtz landed a large part on Broadway opposite Judd Hirsch in the generational drama "Conversations with My Father," with Krumholtz spending the next six months of his life performing in the production. Immediately following his Broadway debut, he landed another prominent role in the children's comedy feature, "Life with Mikey" (1993), starring Michael J. Fox. Things were happening fast, and later that year he played the love interest to the original goth-girl, Wednesday Addams (Christina Ricci) in the hit film, "Addams Family Values" (1993). Soon after, Krumholtz was offered his first work on television, earning a regular role as the younger son of a Limbaugh-esque conservative talk show host (Henry Winkler) on "Monty" (Fox, 1994). The oddly mounted sitcom failed to find an audience of any kind and, within less than two months, was pulled from the schedule. Krumholtz bounced back with a return to the big screen, playing the wise-cracking elf foreman, Bernard, running Santa's factory floor in the comedy hit, "The Santa Clause" (1994), starring Tim Allen.

Krumholtz gave it another go with television, appearing in an episode of the thankfully brief sitcom, "Pig Sty" (UPN, 1994-95), before landing a regular spot on the short-lived "Chicago Sons" NBC, 1996-97) opposite Jason Bateman, as one of three vastly different brothers sharing a Chicago apartment. After appearing twice on the ill-fated "Union Square" (NBC, 1997-98), he returned to film with a small but distinctive part in Ang Lee's excellent suburban drama about teenage angst and family dysfunction, "The Ice Storm" (1997). Back on television, Krumholtz joined the cast of Tom Selleck's "The Closer" (CBS, 1997-98), as a young copywriter on the staff of a high-profile ad agency. That, too, unfortunately lasted less than a full season. However, Krumholtz soon earned good notices for his performance alongside veteran actor Alan Arkin in "The Slums of Beverly Hills" (1998) as the brother of a teenage girl (Natasha Lyonne) leading a nomadic life on the wrong side of the 90210 zip code. Rounding out the 20th century, Krumholtz had a small part in Barry Levinson's coming-of-age drama, "Liberty Heights" (1999), in addition to a more pivotal role as a nebbish teenager trying to help his well-meaning friend (Joseph Gordon-Levitt) win a date with the school's most popular girl (Julia Stiles) in "10 Things I Hate About You" (1999), a modern take on Shakespeare's "The Taming of the Shrew" which received critical raves.

A brief return to television found Krumholtz in episodes of "ER" (NBC, 1994-2009) and "Freaks and Geeks" (NBC, 1999-2000) before landing a regular role as a man trying to convince his therapist that his neighbors are spying on him - which they are - in the neurotic sitcom "The Trouble with Normal" (ABC, 2000-01). Unfortunately, the bizarrely premised series lasted barely a season. In actor-writer-director Edward Burns' "The Sidewalks of New York" (2001), Krumholtz played a struggling musician whose failed marriage leads him to yearn for a 19-year-old waitress (Brittany Murphy). He also made a quick, but hilarious appearance as the wastrel son of a gangster in the Brad Pitt/Julia Roberts vehicle "The Mexican" (2001). In 2002, Krumholtz reprised his elf role for "The Santa Clause 2" (2002), the inevitable sequel to the comedy hit, with Tim Allen once again portraying Old St. Nick. He was then seen in two episodes of the unjustly cancelled college comedy, "Undeclared" (Fox, 2001-02), followed by supporting turns in the minor features "Scorched" (2002) and "Cheats" (2002). In a much more substantial role, Krumholtz starred as Bennie Stillman, an Arizona college student at the center of one of the biggest point-shaving scandals in collegiate history, in the fact-based TV drama "Big Shot: Confessions of a Campus Bookie" (FX, 2002). Once again, he had bad luck choosing long-lasting TV series when he joined the cast of the Rob Lowe political drama "The Lyon's Den" (NBC, 2003-04); the show was quickly voted out of office due to poor ratings. As disappointing as another series failure may have been, it did not slow the busy Krumholtz down in the least. He lent support in films as diverse as the lauded musical biopic "Ray" (2004), the raunchy buddy comedy "Harold & Kumar Go to White Castle" (2004), and the cult sci-fi adventure "Serenity" (2005).

Krumholtz's TV series curse was finally broken when he beat out dozens of other actors to win the role of mathematical genius Charlie Eppes on the crime drama "Numb3rs" (CBS, 2004-2010). In the Ridley- and Tony Scott-produced procedural, Krumholtz played the brother of Don (Rob Morrow), an FBI agent whose team utilizes Charlie's mathematical acumen to solve the most difficult cases. Coincidentally, the role of the Eppes brothers' father was played by revered actor Judd Hirsch, who had played Krumholtz's dad in his first professional role on stage more than a decade earlier. The show was one of the network's better performers for several seasons, and elevated Krumholtz's career standing substantially. Juggling his busy schedule during the run of "Numb3rs," Krumholtz still managed to make several small, often uncredited, appearances in films like the Jack Black rock comedy "Tenacious D in 'The Pick of Destiny'" (2006); the ensemble drama centered around RFK's assassination, "Bobby" (2006); the teen buddy comedy hit "Superbad" (2007); and the faux musical biopic "Walk Hard: The Dewey Cox Story" (2007). The following year, he reprised the role of Goldstein in the sequel "Harold & Kumar Escape from Guantanamo Bay" (2008), in addition to an uncredited cameo in the "bromantic comedy" "I Love You, Man" (2009), and voice work as an alien commander in the animated sci-fi feature "Battle for Terra" (2009). Post-"Numb3rs" work included a guest starring appearance on an episode of the crime drama "Law & Order: SVU" (NBC, 1999- ) in 2010. ... (more) (less)
Tags: American (4), Child Actor (3), Male (2), Actor (2), Movies (1), Tv (1), Serenity (1), Born 1978 (1), 10 Things I Hate About You (1), Curly Hair (1), Born In 1978 (1), Superbad (1), Numb3rs (1)
My tags:

2. Down with the King

3. Super Pumped: The Battle for Uber

4. Wolfboy and the Everything Factory

5. The Plot Against America
View all David Krumholtz TV (24 more)

kathy voted for an image 2 years ago