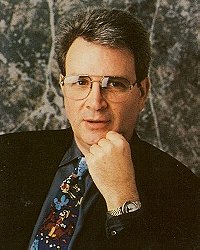 View all David Gerrold pictures
David Gerrold (born January 24, 1944) is an American science fiction screenwriter and novelist known for his script for the popular original Star Trek episode "The Trouble With Tribbles", for creating the Sleestak race on the TV series Land of the Lost, and for his novelette "The Martian Child", which won both Hugo and Nebula awards, and was adapted into a 2007 film starring John Cusack.
Tags: Writer (2), Novelist (2), Science Fiction (1), Gay (1), Lgbt (1), American (1), Speculative Fiction (1), Born 1944 (1)
My tags:

2. Battle for the Planet of the Apes

2. Battle for the Planet of the Apes

2. Chaos on the Bridge

2. The Man Who Folded Himself

3. Chess With a Dragon

4. Encounter at Farpoint (Star Trek: The Next Generation)

1. The Martian Child: A Novel about a Single Father Adopting a Son

5. The Man Who Folded Himself
View all David Gerrold books (21 more)