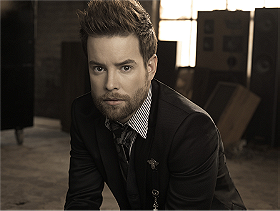 In 2006, Cook self-released an album, Analog Heart, which became popular during Cook's run on American Idol. As of 2009, the album has sold less than 5,000 units in the United States.

Since his win, he has released five singles, including "The Time of My Life" and "Light On". His self-titled album was released on November 18, 2008, via RCA Records. The album debuted at #3 on the Billboard 200 chart, and shortly afterward the album had gone Platinum by the Recording Industry Association of America. The album was also certified Gold by the Canadian Recording Industry Association.

Analog Heart is the debut solo album by singer/songwriter/guitarist David Cook. All songs on the album were written by him. Though originally released as an independent record on May 6, 2006, Analog Heart sales jumped during Cook's appearance on the seventh season of American Idol.
Analog Heart won the Urban Tulsa Weekly's "Absolute Best of Tulsa" award for "Best Locally Produced, Independent Album" in 2007. The album was chosen as the fourth-best CD released in 2006 by website Music Equals Life.
On April 18, 2008, Analog Heart was listed as the number one album for "Today's Top MP3 Albums" on Amazon.com, and David Cook was listed as number one for "Today's Top MP3 Artists". Soon thereafter, the album was removed from Amazon. The album sold 900 copies in its last week before being removed, and 300 the week before that. Prior to those two weeks, according to Nielsen SoundScan data, the album had not sold more than 5 copies in a single week.
In an article published on USAToday.com on May 23, 2008, Cook explained to reporters in a conference call why Analog Heart had to be removed from Amazon: "About midway through the season, I had to have the record pulled, obviously, for fairness issues on the show. And I got it pulled offline. But somebody, I have no idea who, reposted it on Amazon, so while that was going on, I was kind of at a loss. I talked to Amazon about getting it pulled, and there was a bunch of mass confusion about it. I'm extremely appreciative at how well it did. But I was kind of a pawn in that whole game." Nonetheless, other pre-Idol albums from Brooke White, Carly Smithson and Kristy Lee Cook remained on the market.

David Cook is the first major-label album from seventh season American Idol winner David Cook. The album was released on November 18, 2008 in the United States, was certified platinum and has sold over one million copies in the United States. It has produced two top twenty singles, "Light On" and "Come Back To Me". The single "Time of My Life" has also been certified platinum by the RIAA. "Light On" was certified platinum in January 2010.
The first single, "Light On", was released to U.S. radio on September 30, 2008. The song sold 109,000 digital downloads in its first week of availability, leading to a #17 debut on the Billboard Hot 100 and #8 on the Hot Digital Songs chart. "Light On" was certified platinum in January 2010.
"The Time of My Life" (his first feature single as the winner of American Idol) is also featured as a bonus track on the album.
On February 27, 2009, Entertainment Weekly ran a piece saying that Cook will be releasing not one, but two singles in March 2009, "Come Back to Me" and "Bar-ba-sol." The video for "Come Back to Me" premiered on American Idol on April 1.
On May 20, 2009, David performed the song "Permanent" on the finale of American Idol Season 8. The song was released as a single with the money from the song and the video of his performance going to charity. The single version of the song is longer than the version on his album.

This Loud Morning is the second major-label studio album by American singer-songwriter and American Idol season 7 winner David Cook. It will be released on June 28, 2011. Executive produced by Matt Serletic, This Loud Morning will feature tracks written and co-written by Cook along with many acclaimed songwriters, including David Hodges, Ryan Tedder, Kevin Griffin and Marti Frederiksen.
"The Last Goodbye" is the first official single from This Loud Morning and was released on April 19, 2011. The song made its debut live on the American Idol (season 10) top 7 results show on April 21, 2011. "The Last Goodbye "sold 22,000 copies in it's first week and entered the Bubbling Under Hot 100 chart at #5 (equivalent to #105 in Hot 100). The single has sold 78,000 as of 24th May, 2011.

3. Beyond the Moons (Spelljammer: Cloakmaster Cycle)

4. Soldiers of Ice (Forgotten Realms - The Harpers, No 7)

5. Oriental Adventures: The Rulebook for AD&D Game Adventures in the Mystical World of the Orient (Offi
View all David Cook books (2 more)

2. Soldiers of Ice (Forgotten Realms - The Harpers, No 7)

3. Oriental Adventures: The Rulebook for AD&D Game Adventures in the Mystical World of the Orient (Offi

4. Beyond the Moons (Spelljammer: Cloakmaster Cycle)

lalabellexoxo added this to a list 2 years, 11 months ago
Music That Has Inspired My Writing (450 person items)

lalabellexoxo added this to a list 3 years, 2 months ago

"August, 2008. I met him in Tampa for the American Idol tour. We found out that the contestants were meeting fans outside the arena hours before the concert, and we were really excited when David came out because he was the winner and our favorite contestant of the season. Because he was so popular and had so many people to meet, he couldn't pose for pictures, but my sister and I got a hug, and our mom told him we voted for him twelve times on the night of the finale, and he thanked us."

lalabellexoxo added this to a list 4 years, 3 months ago
My Hottest Men In Entertainment List 2016 (373 person items)