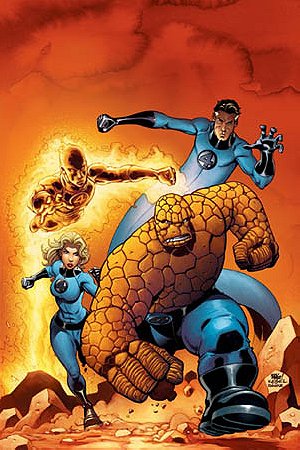 1 vote
View all Fantastic Four pictures
The Fantastic Four is a fictional superhero team appearing in comic books published by Marvel Comics. The group debuted in The Fantastic Four #1 (cover dated Nov. 1961), which helped to usher in a new level of realism in the medium. The Fantastic Four was the first superhero team created by writer-editor Stan Lee and artist/co-plotter Jack Kirby, who developed a collaborative approach to creating comics with this title that they would use from then on. As the first superhero team title produced by Marvel Comics, it formed a cornerstone of the company's 1960s rise from a small division of a publishing company to a pop culture conglomerate. The title would go on to showcase the talents of comics creators such as Roy Thomas, John Buscema, George Pérez, John Byrne, Steve Englehart, Walt Simonson, and Tom DeFalco, and is one of several Marvel titles originating in the Silver Age of Comic Books that is still in publication in the 2010s.

brownbagcomics rated this 7/10 8 months ago

deathskfull rated this 6/10 9 months ago

dapkarte added this to want to read list 5 years, 3 months ago

upgradeslinky added this to Read list 5 years, 9 months ago