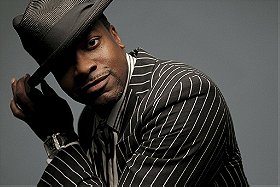 After graduating from high school, Tucker made the change to move to Hollywood from Georgia to pursue a career in show business.

Chris Tucker found himself being a frequent guest on the Def Comedy Jam. Tucker was noted for doing exceptionally "clean", non-vulgar stand-up comedy routines. Tucker states his inspirations for comedy are, Eddie Murphy and Richard Pryor.

Chris Tucker made his film debut in 1994 on House Party Three, along side stars such as Bernie Mac,Marques Houston, and Khandi Alexander. In 1995, Chris Tucker then appeared in one of his most notable and hilarious films, Friday. Chris Tucker starred in Friday along side Ice Cube. Tucker's character, Smokey was a drug addict, who was an energetic and outlandish person. Films such as Friday showed Tucker's television-comedy styling very different from his stand-up. In 1995, Tucker also managed to appear in another film, Dead Presidents. Chris Tucker a young-comedian, recently graduated high school, and to already have worked along side Hollywood's biggest,showed Tucker had a colossal amount of talent!

In 1997 was the busiest year of Tucker's career, he starred in three hit-movies all in the same year: The Fifth Element, Money Talks, and Jackie Brown.

In 2001, Chris Tucker also was in a music-video with friend,pop-legend, Michael Jackson. Chris Tucker was in the music video,"You Rock My World".

PulpRoman added this to a list 5 years, 9 months ago
Favourite Actor and Actresses (43 person items)

Smiler1 added this to a list 5 years, 12 months ago
Celebrities I like that are christians (20 person items)

Smiler1 added this to a list 6 years, 5 months ago
All time comedians I find funny (30 person items)

Smiler1 added this to a list 6 years, 5 months ago
Actors I like that aren't my favorite actors (58 person items)