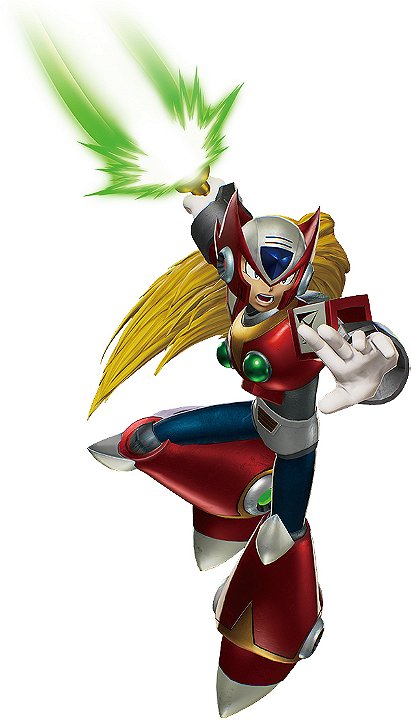 View all Zero pictures
"Even if we Reploids are destined to join the scrap heap when that evolutionary step does come about... We still have to fight... Not only against Mavericks, but against our own destiny as well."
―Zero, Mega Man X8

"I never cared about justice, and I don't recall ever calling myself a hero. I have always only fought for the people I believe in. I won't hesitate... If an enemy appears in front of me, I will destroy it!"
―Zero, Mega Man Zero 4

Zero (ゼロ?) is one of the three main characters of the Mega Man X series, as well as the protagonist of the Mega Man Zero series. He is the successor of Bass and Dr. Albert Wily's greatest creation. He also makes an appearance as Biometal Model Z in the Mega Man ZX series. A high ranking Maverick Hunter in the X series, and a legendary freedom fighter in the Zero series, he's a die hard warrior who doesn't hesitate to take action. However, behind his cold and emotionless attitude lies a wounded soul. He is well known as X's partner.

"Series: Mega Man Zero Sword: Z-Saber The last creation of Dr. Wily, Zero was meant to be the enemy of Mega Man X but instead he became his friend. Not only that, he saved the world and brought peace between humans and robots, which was what Dr. Light wanted all along. His signature weapon is the Z-Saber, which he uses by slashing and cutting everything in his path. All of this makes Zero an unstoppable fighter."

Angel Chavez rated this 8/10 5 years ago

Mac the lust added this to Rated list 5 years, 1 month ago