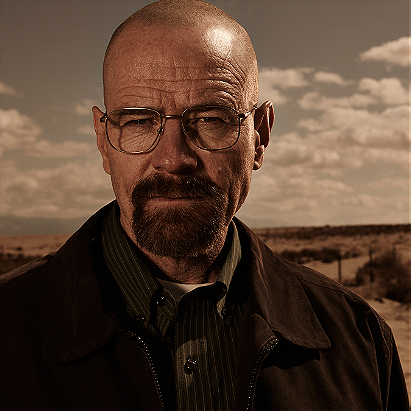 2 votes
View all Walter White (Heisenberg) pictures
Walter Hartwell White (also known by his clandestine alias Heisenberg) is the main protagonist of Breaking Bad, portrayed by Bryan Cranston. A graduate of the California Institute of Technology, Walt was once a promising chemist who was one of the founders of the multi-billion dollar company Gray Matter Technologies. He abruptly left the company, selling his shares for $5,000, and subsequently moved to Albuquerque, New Mexico where he became a high school chemistry teacher. After being diagnosed with Stage IIIA lung cancer, he resorts to manufacturing methamphetamine and drug dealing to ensure his family's financial security after his death. Series creator Vince Gilligan has described his goal with Walter White as "turning Mr. Chips into Scarface", and deliberately made the character less sympathetic over the course of the series. Walt's evolution from mild-mannered school teacher and family man to ruthless criminal mastermind and murderer is the show's central focus.

Although AMC officials hesitated to cast Cranston due to his previous comedic role on Malcolm in the Middle, Gilligan cast him based on the actor's past performance in the X-Files episode "Drive", which Gilligan wrote. Cranston contributed greatly to the creation of his character, including Walt's back story, physical appearance, and personality traits. Both the Walter White character and Bryan Cranston's performance have received critical acclaim. Cranston won four Primetime Emmy Awards for Outstanding Lead Actor in a Drama Series, three of them being consecutive, becoming the second actor to do so since Bill Cosby for I Spy in the 1960s.[1][2] Following his fourth win, Cranston tied Dennis Franz for the most wins in the category's history.

In the Spanish-language remake Metástasis, his character is renamed Walter Blanco and is portrayed by Diego Trujillo.

CheoFuenmayor rated this 10/10 4 weeks ago

petrovsky rated this 7/10 1 month ago

Magnifik added this to a list 1 month, 4 weeks ago
Favorite Characters (246 characters items)

crazymetalhead added this to a list 9 months, 3 weeks ago
Favorite Characters (112 characters items)

deathskfull rated this 9/10 11 months ago

Ognen Vasileski added this to a list 11 months, 2 weeks ago
Best Villains of All time (2386 characters items)

crazymetalhead added this to a list 1 year, 1 month ago
666GreatestFictionalVillains in abc order (2022) (354 characters items)

crazymetalhead added this to a list 2 years, 5 months ago
666GreatestFictionalVillains in abc order (2021) (606 characters items)

WillChangeTomorrow rated this 9/10 2 years, 6 months ago

Kengg added this to Rated list 2 years, 11 months ago

Discord added this to a list 3 years, 4 months ago
Personajes Favoritos (by Discord) (15 characters items)