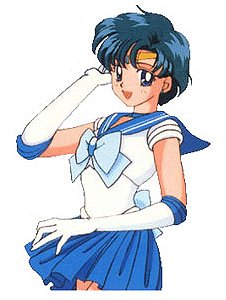 1 vote
View all Sailor Mercury pictures (35 more)
Sailor Mercury (セーラーマーキュリー Sērā Mākyurī?) is a fictional character in the Sailor Moon manga series created by Naoko Takeuchi. The alternate identity of Ami Mizuno (水野 亜美 Mizuno Ami?, renamed "Amy Mizuno" in some English adaptations), a teenage Japanese schoolgirl, she is a member of the Sailor Soldiers, female supernatural fighters who protect the Solar System from evil.
Sailor Mercury is the first Sailor Soldier to be discovered by Sailor Moon, and serves as the "brains" of the group. She possesses powers associated with water, is highly intelligent, and can use a supercomputer to collect information on various battle factors.
Aside from the main body of the Sailor Moon series, Ami features in her own short story in the manga, Ami's First Love. Originally published in volume fourteen of the manga, this was the only of three "Exam Battle" stories to be made into a "Special" for the anime. A number of image songs mentioning Ami's character have been released as well, including the contents of three different 3-inch CD singles.

WillChangeTomorrow rated this 8/10 2 months, 1 week ago

krosis added this to a list 6 months, 3 weeks ago

Leader Vladimir voted for an image 3 years, 8 months ago

jenndubya added this to a list 3 years, 8 months ago