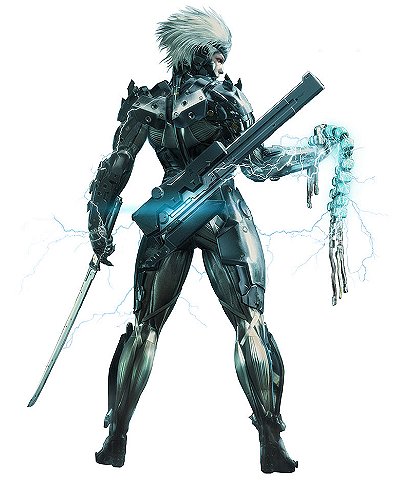 View all Raiden pictures (11 more)
Raiden (雷電?), real name Jack, is a Liberian-American mercenary and former special forces soldier. Previously a child soldier under Solidus Snake, Raiden was later selected by the Patriots to test the S3 Plan at the Big Shell, as a new recruit to the reformed FOXHOUND unit. He later worked alongside the Paradise Lost Army in their anti-Patriot activities, but was captured and forced to undergo heavy cybernetic experimentation. After successfully escaping, Raiden went on to assist Solid Snake during Liquid Ocelot's Insurrection. He later joined the PMSC Maverick as a means to support his family, but entered the battlefield once more after rival group Desperado ruined one of their missions, leaving him injured.

WillChangeTomorrow rated this 8/10 12 months ago

FlippySuper rated this 5/10 3 years ago

"Series: Metal Gear Sword: High frecuency blade Already a remarkable swordsman thanks to his training, Raiden underwent a medical procedure that turned him into a cyborg, increasing his strength, speed and skill with the blade. The result not only made him more dangerous than ever before, it also increased his popularity! In battle, Raiden uses a sword with a vibration power that allows the weapon to cut through nearly anything. Raiden's cybernetic enhancements allow him wield the blade even wi"