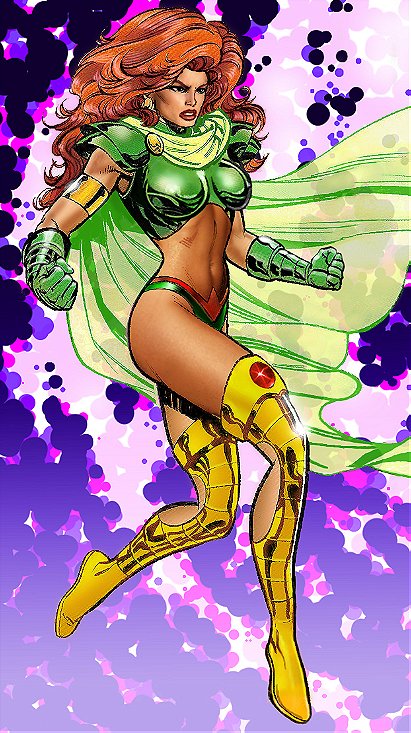 21 votes
The Many Loves of Superman (10 items)
list by KBLists
Published 5 years, 9 months ago

View all Maxima pictures (15 more)
Oldest child of the Royal family of the planet Almerac, the fiery-tempered Maxima came to Earth in search of a suitable mate to sire her heir, leaving behind Ultraa, her betrothed.

As a scion of the Blood Royale of Almerac, Maxima commands a vast array of immense psionic powers that come from selective breeding and years of gene therapy which she can utilize in a variety of ways. In her first face to face encounter with Superman[ she displayed a high level of psionic powers, such as psychokinesis and seemingly hypnotic mind control. Maxima can use her psionic powers to give herself superhuman strength, enough to prove an effective opponent in hand-to-hand combat with Superman. She also has enhanced stamina, as well as some degree of superhuman speed. Through skillful application of her psionic powers Maxima has been shown to emit powerful optical beams that can stagger even Superman, and she can create nearly impervious force fields. In the first battle with Doomsday in Adventures of Superman #498, Maxima is the only one in that incarnation of the Justice League that was able to actually hurt and withstand blows from Doomsday, besides Superman.

princesstwi added this to a list 1 year, 10 months ago
Invulnerability (27 characters items)

princesstwi added this to a list 1 year, 10 months ago
Superhuman Speed (33 characters items)

princesstwi added this to a list 1 year, 10 months ago
Superhuman Strength (89 characters items)

KBLists added this to a list 5 years, 9 months ago

The Many Loves of Superman (10 characters items)

"First Appearance: Action Comics #645 (September, 1989) So Maxima was basically included here to round out the list to a nice even ten. Since her relationship with Superman basically consisted of her obsession for him and his repeated rejection of her, her qualifications as a love interest are debatable. Nonetheless, the alien Princess deserves points for persistence. Having decided that Superman was the only worthy mate in the universe, she came to Earth openly confessing her desire to make "