The Many Loves of Superman

The top choice is obvious. Be she the eternal damsel in distress, hard-nosed career woman, or wife of the world's greatest superhero, Lois Lane has been whatever Superman (and his writers) has needed her to be in more than seventy years of publication history. She's not only Superman's best-known romantic interest, she's probably been his most constant ally throughout his publication history (yes, even moreso than his pal Jimmy Olsen), having debuted in the very same issue in which the Man of Steel first came to print. There are those classic couples in myth, history, and popular culture whose names just go together. Antony and Cleopatra. Samson and Delilah. Romeo and Juliet. Bonnie and Clyde. Bogey and Bacall. Lois and Clark. That's how it should be. 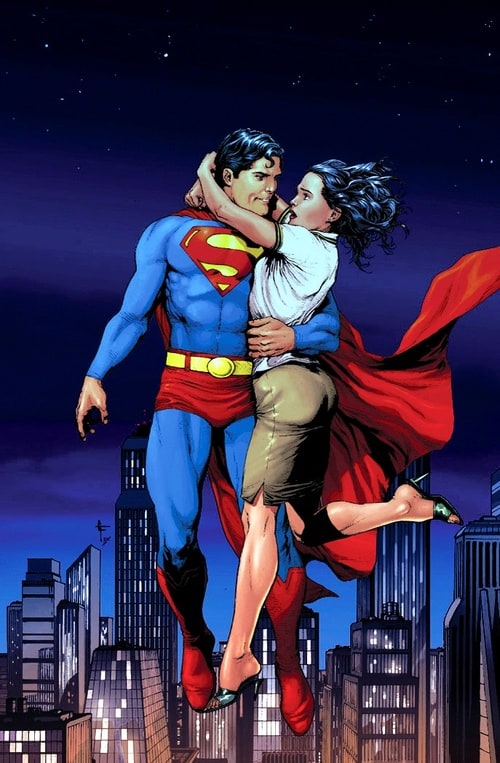 Lana Lang is the epitome of the "girl next door." She grew up in Smallville with Superman and in the old days was basically the teenage equivalent of Lois Lane in the silver age Superboy stories. Like Lois, Lana was fighteningly obsessive about Kal-El and spent most of her free time trying to prove that Clark Kent was indeed the Boy of Steel. Eventually the adult Lana was introduced into the Superman comics to provide some love-triangle conflicts for Superman and Lois, which became a major theme for Superman stories in the 1950s and 1960s. Over time, writers have given Lana a more complicated relationship with Clark, but she remains one of his most dependable confidants and a healthy dose of sexual tension is always present between the two. 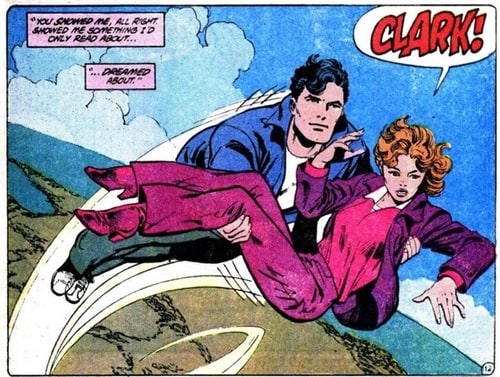 Though Wonder Woman is one of Superman's oldest allies, she is the latest female to become Superman's leading lady. True, the pair have shared some intense flirtation and even some epic make-out sessions in their decades-long history together, but with DC's "New 52" launched in 2011 revamp the became DC's central romantic couple. It makes sense, really. They are possibly the two most powerful superheroes on the planet; they have similar ideologies; they both are outsiders on some level; and they spend a lot of time together. No wonder Clark saw fit to buy an engagement ring for her. Of course all good things come to an end and it seems that recent events involving Superman losing his powers have forced a divide between the two. Clark never did end up giving her the ring. And the coming "Rebirth" event at DC might have even more repercussions for the pair. 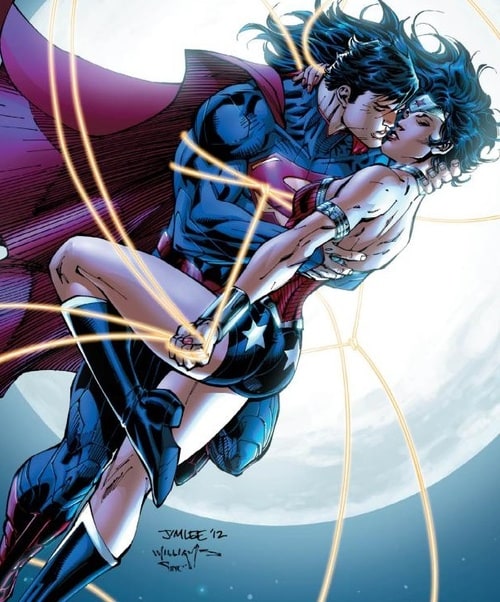 It could actually be argued that Superman loved Lyla Lerrol more than any of the other women on this list, even Lois Lane. After all, in the classic "For the Man Who Loves Everything" storyline, when Superman is attacked by a parasitic creature which makes him dream of his ultimate fantasy while it feeds off of his life force, Superman dreams of a life married to Lyla, not Lois! Unlike Lois, Lyla is a fellow Kryptonian whom Superman met when he accidentally traveled back in time and was stranded on Krypton at a time shortly before its destruction. Lyla was the most famous movie star on Krypton and she and Superman intended to marry before Superman realized that he could not prevent her from perishing in Krypton's inevitable explosion. Sadly, Superman lost not only his parents but possibly the love of his life in a single moment. 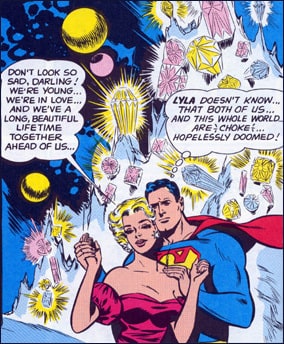 "The Girl From Superman's Past" was the title of one of the classic Superman tales from comics' so-called Silver Age. In it, we were given our first glimpse of Clark Kent in his college years. Clark had fallen in love with a beautiful classmate who had been confined to a wheelchair. Smitten after several dates, Clark proposed marriage but was saddened by a subsequent rejection from Lori. Investigating, Clark soon learned that Lori was in fact a telepathic mermaid and that this difference was her reasoning for ending their relationship. The two would remain goods friends and shared several subsequent adventures, but never rekindled their old romantic relationship. 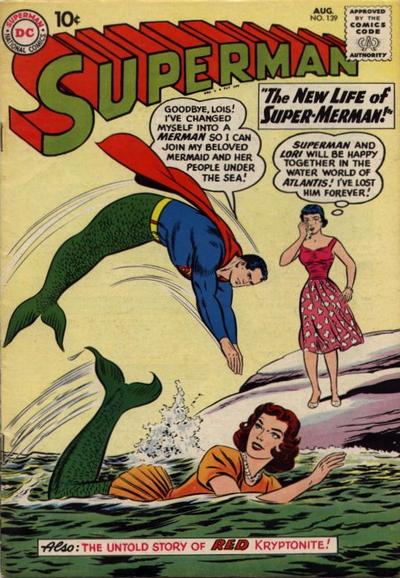 Supes got around a lot during the Silver Age of comics, particularly with blondes, and even more particularly with women whose named featured the initials L.L. His relationship with Luma Lynai was among the most disturbing for several reasons, not the least of which was that she was identical in appearance to Superman's cousin, Supergirl, only older. Even stranger, it was Supergirl herself who hooked Superman up with Luma, after lamenting that, due to their being family and all, she could not marry cousin Kal herself. Superman immediately fell passionately in love with Luma, an alien from the planet Staryl, upon meeting her but alas this relationship too was doomed to fail. Poor Luma's alien physiology meant that Earth's yellow Sun would kill her. Though Superman wanted to abandon all of us and stay with her, Luma recognized his responsibility to his adopted home and ended their relationship for the good of mankind. Earth thanks you, Luma. 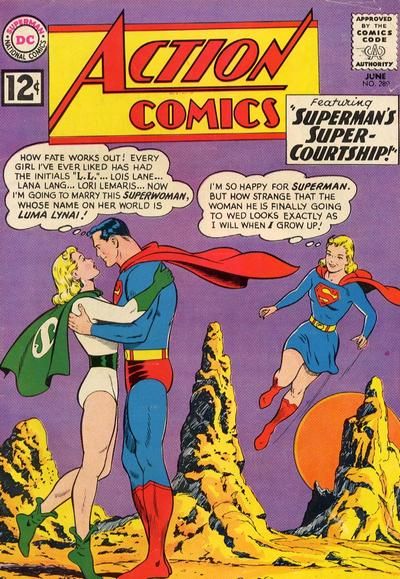 As the result of exposure to Red Kryptonite, Superman went amnesiac and fell for this lovely heiress with whom he began a dramatic brief relationship. Sadly, she was doomed to become "The Sweetheart Superman Forgot." Sally and the amnesiac Clark Kent (going by the name Jim White) briefly planned to get married until an accident left him apparently paralyzed (remember, he didn't realize he was the Man of Steel) and prompted a depressed Clark to leave Sally. The pair were briefly reunited some time later, after Clark had resumed his Superman identity, and one of Sally's kisses triggered memories of their short but loving relationship. Superman genuinely fell in love with Sally, a woman who has loved him without knowing of his incredible powers and heroic persona. However, realizing that any woman he married would become a potential target for his many formidable enemies, Superman swallows his feelings and tells Sally that Jim White has died. It's for her own good, but wow, Supes, that's a pretty harsh way to break off an engagement with an all-around good person. 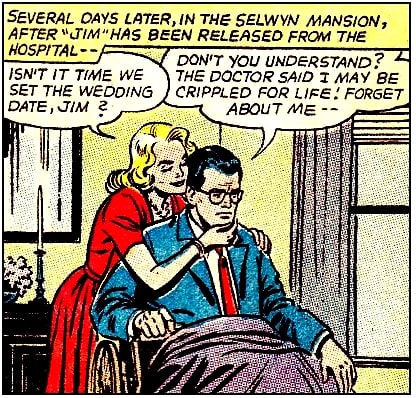 A successful columnist and a divorced single mother, Cat Grant was introduced as part of DC's modernization of its comics line during the mid-1980s. Aggressive, wearing provocative clothing, and career-minded, she was a confident female who knew what she wanted and how to get it -- and what she wanted was Clark Kent. She and Clark did date for a time, which added some needed drama to the Superman/Lois Lane dynamic. In one of history's worst trade downs, she eventually gave up her pursuit of Clark for Jimmy Olsen, who initially wanted nothing to do with her. Now, however, Cat and Jimmy seem to be in a healthy romantic relationship. 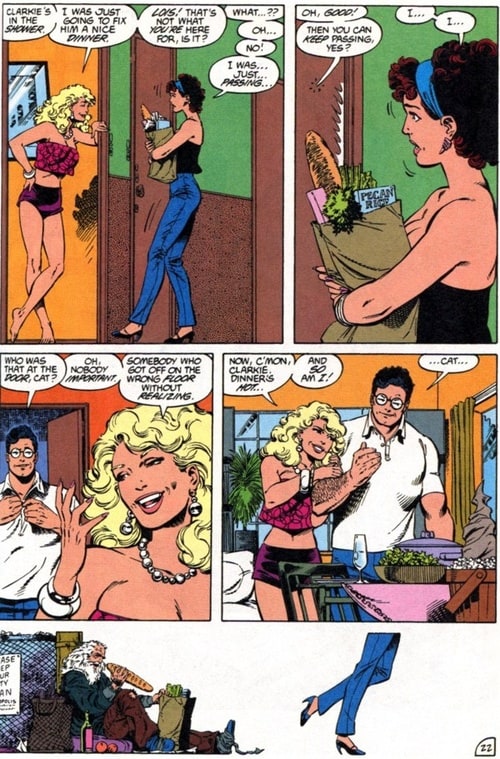 I know what you're thinking. Superman had the hots for his cousin? Well, there were certainly some awkwardly lustful kisses between Kal-El and Kara in their history together. Then there was the other Supergirl, the origin of which is a little too convoluted to summarize here. Suffice it to say her name was Linda Danvers and she was of no family relation to Supes. Anyway, in a story-line involving alternate Earths and timelines that I wont bother to explain here, Superman winds up approaching Linda (calling her by his cousin's name, Kara!) and tells her that he never loved Lois and that hers is a "heart I can't live without." Afterwards he gives a deep kiss that Linda doesn't seem to mind at all. 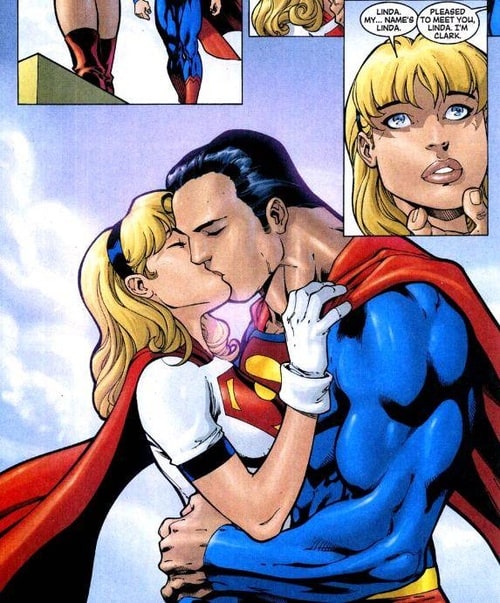 So Maxima was basically included here to round out the list to a nice even ten. Since her relationship with Superman basically consisted of her obsession for him and his repeated rejection of her, her qualifications as a love interest are debatable. Nonetheless, the alien Princess deserves points for persistence. Having decided that Superman was the only worthy mate in the universe, she came to Earth openly confessing her desire to make babies with him. Superman, concerned that any offspring between the two would be raised as despots over on Maxima's native Almerac, politely refused. Maxima remained undeterred however and continued to pursue Superman's super-sperm, even following his marriage to Lois Lane. Sadly for her, the most she ever accomplished was a super-kiss or two. 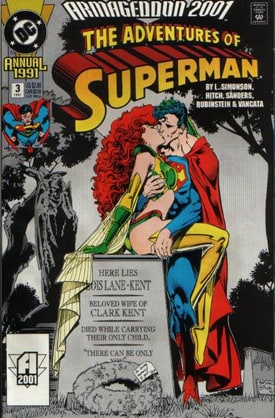 The Evolution of Superman
11 item list by nehocb
89 votes

Who's The Best Superman?
11 item list by jeddzagan
2 votes

When Anne Vyalitsyna Was In Vogue by TrekMedic

The Age of Gabrielle Union by Rodimus

The Age of Riley Keough by Rodimus

Most Beautiful Womens in the world by ginofavara