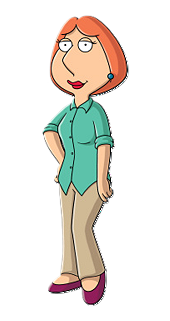 View all Lois Griffin pictures (10 more)
Lois Patrice Griffin (née Pewterschmidt) is a character from the animated television series Family Guy. She is voiced by writer Alex Borstein and first appeared on television, along with the rest of the family in the 15-minute short on December 20, 1998. Lois was created and designed by series creator Seth MacFarlane. MacFarlane was asked to pitch a pilot to the Fox Broadcasting Company based on Larry and Steve, a short made by MacFarlane which featured a middle-aged character named Larry and an intellectual dog, Steve. After the pilot was given the green light, the Griffin family appeared on the episode "Death Has a Shadow".

Lois is the mother of the Griffin family. With her husband Peter, she has had three children: Meg, Chris, and Stewie. Lois is often portrayed as a stereotypical television mother, despite her admitting to being a drug user, a recovering meth addict kleptomaniac. Lois has also had several affairs, one of which allegedly resulted in the conception of Meg. She has appeared in other media relating to Family Guy—including a video game, commercials and books—and inspired an entire line of merchandise. Lois's distinctive New York accent originated from a character in a stage show that Alex Borstein had performed in, which was largely inspired by a relative who grew up on Long Island, New York.

nofinalaccount rated this 1/10 3 years, 4 months ago

italia23 added this to Rated list 5 years, 8 months ago

Director Black rated this 5/10 6 years ago