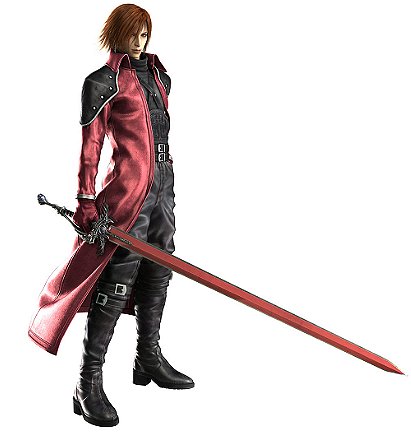 View all Genesis Rhapsodos pictures
Genesis Rhapsodos (ジェネシス ・ラプソードス Jeneshisu Rapusōdosu?) is a character in the Compilation of Final Fantasy VII. who acts as the primary antagonist of Crisis Core. Genesis was a product of the same program that created Sephiroth, but Genesis was not as stable as Sephiroth and began suffering from a degenerative process called "degradation" after being wounded during a sparring match with Sephiroth and Angeal. Allying with a rogue Shinra scientist named Hollander, Genesis fights against the company while seeking a way to stop his degradation using Sephiroth's stable cells. Eventually, Genesis is first defeated by Zack, then cured of his degradation by the Lifestream. Genesis was taken in by Deepground, who gave him the codename "G", and used him to create the Tsviets. Refusing to follow along with the Tsviets plans after their rebellion, he seals himself in a cave until he is needed. During the secret ending of Dirge of Cerberus, Genesis awakes, determined to protect and defend the planet.[

"Series: Final Fantasy VII Sword: Rapier Votes: 3 Created by the same genetic experiments that gave birth to Sephiroth, Genesis became a SOLDIER First Class. Unfortunately, he was born a genetic degradation, so he started a rebellion to find a cure. He wields the Rapier, a large sword with a red blade, and variably uses it one or two-handed. Genesis can channel magic into sword, endowing it with a red aura and emblazoning runic symbols along its length. Controversial as he might be, there is no "