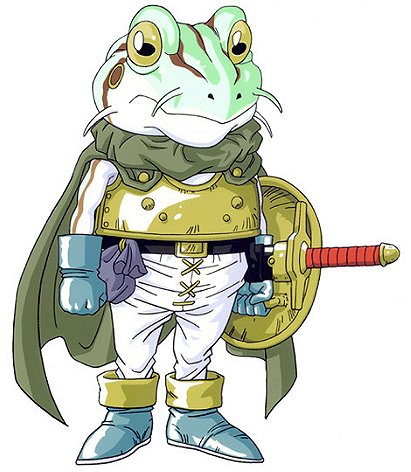 View all Frog pictures
Frog is a character from the video game Chrono Trigger. He is an anthropomorphic frog knight from the Middle Ages era. He is called Kaeru (カエル?, literally "Frog") in Japanese materials. He was born as a human named Glenn and a friend of the knight Cyrus. After witnessing Cyrus' death at the hands of Magus and being transformed into a frog, Frog vowed to avenge Cyrus by killing Magus. During the game, he obtains the Masamune (Grandleon in the Japanese version,) an ancient sword whose offensive capabilities against magic users is Magus's major weakness. The frog can later put Cyrus' ghost to rest, regaining his courage and clearing his conscience.

Leader Vladimir added this to a list 4 years, 7 months ago

"Series: Chrono Trigger Sword: Masamune Votes: 5 A frog isn't exactly what you would expect when you think of a knight in shining armor, but Frog certainly fits the bill. Originally a knight named Glenn, the evil Magus turned him into a frog and killed his friend Cyrus. Swearing vengeance for his friend, Frog joins Chrono's group. Frog's already extraordinary skills with the sword are enhanced by his new form, including increased strength, agility, use of a sticky tongue to draw enemies to his r"