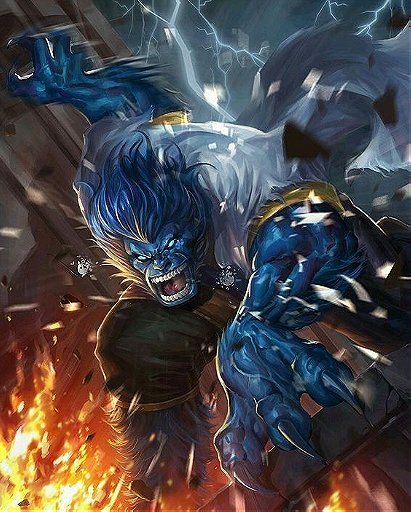 1 vote
View all Beast pictures (36 more)
Henry Phillip McCoy's father, Norton McCoy, worked at a nuclear power plant where he was exposed to massive amounts of radiation during an accident. Norton was unharmed, but the radiation affected his genes and, as a result, his son was born a mutant. Unlike most mutants, Henry showed signs of mutation from birth: unusually large hands and feet. A prodigy, Hank was also endowed with an innate superhuman intellect and during adolescence he gained the power of simian-like augmented agility, reflexes, and strength.

bombshellbarba added this to a list 8 months, 2 weeks ago
Enhanced Reflexes (90 characters items)

bombshellbarba added this to a list 8 months, 2 weeks ago
Enhanced Agility (92 characters items)

bombshellbarba added this to a list 8 months, 2 weeks ago
Super Strength (291 characters items)

Jason voted for an image 4 years, 11 months ago

Ghosthack rated this 7/10 5 years ago

upgradeslinky rated this 8/10 5 years, 9 months ago

Wandad Farkhondeh rated this 9/10 6 years ago

Georgini added this to a list 6 years, 3 months ago
My Marvel Dream Team (27 characters items)