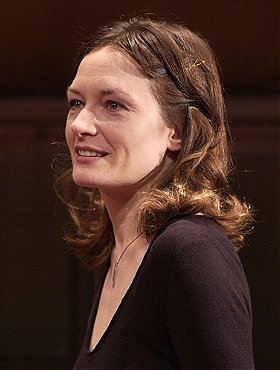 She was nominated for a Laurence Olivier Theatre Award in 2001 (2000 season) for Best Supporting Actress for her performance in "All My Sons" at the Royal National Theatre, Cottesloe Stage.

Trained at Oxford School of Drama.

Was in a relationship with actor Joseph Fiennes, between 1998 and 2000.

Her grandparents were Irish.

Her mother died when she was 6 years old. She was brought up Catholic by her father, a steelworker.

McCormack's first notable role was as the character Murron MacClannough in the multiple Academy Award winning movie Braveheart. Her screen debut however was as the lead in the Anna Campion directed film Loaded, and has subsequently stated that she had a "miserable time with the director (Anna Campion)... it was my first film job, I needed to be mollycoddled, I needed to be helped through it, and I wasn't. Mostly, it was a horrible experience." After Braveheart, McCormack had lead roles in Nils Gaup's Northstar and Marshall Herskovitz's Dangerous Beauty. Other films include Spy Game and 28 Weeks Later. Despite being in demand, she does few films, stating that "I read very few scripts I'm passionate about... Maybe one in every twenty or thirty". ... (more) (less)
Tags: British (3), Brunette (3), Born 1972 (3), English (2), Female (2), White (2), Actress (2), Actor (2), Catholic (1), Beautiful (1), Cougar (1), Oxford University (1)
My tags:

Oliver voted for an image 11 months, 1 week ago

Oliver voted for an image 1 year ago

MUZE voted for an image 1 year ago

cutelioncub added this to a list 2 years, 9 months ago
My favorite retro beauties (19 person items)

dvirgueza voted for an image 3 years, 11 months ago

Exclusive added this to a list 4 years, 4 months ago

" as Elizabeth Hadley in Spy Game"

lechat voted for an image 5 years, 1 month ago

diamondgirl88 added this to a list 5 years, 2 months ago
Favorite beauties of all times (random order) (101 beauty items)

SwornShadow added this to a list 5 years, 5 months ago
Whoa! Smokin' (436 person items)