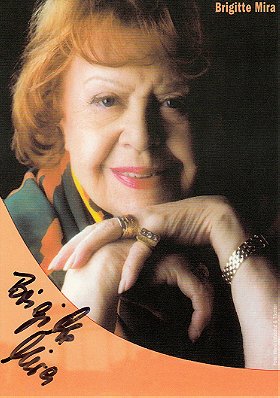 Believed to have been born in Hamburg, she moved early on to Berlin. Brigitte Mira's mother was German while her father was Russian Jewish. During the Nazi era, Mira took part in the propaganda series Liese und Miese. She played Miese (germ. bad one) –- the bad role model according to Nazi ideology—who listened to enemy radio stations and stockpiled rationed food. But her acting skills turned the "bad" character she portrayed into a likeable one. The series was soon cancelled for being counter productive. The propaganda directors did not know that Mira was half-Jewish, for she had false papers. Even though she insisted on her naivete as a young woman and the fact she had to conceal her origins, she was criticized later by some for taking part in these ads at all.

Notable performances include Emmi Kurowski in Fear Eats the Soul (1974), a role for which she won a German Film Award. In the 1980s Mira achieved another big success with the television series Drei Damen vom Grill. She appeared in the 1991 Berlin stage production of Stephen Sondheim's Follies. ... (more) (less)
Tags: Actress (1), German Actress (1)
My tags:

3. Fox and His Friends

4. Fox and His Friends