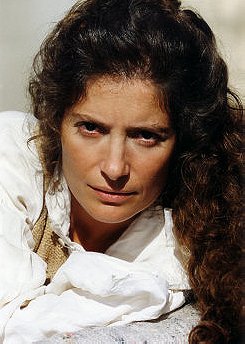 Her performances have been acclaimed in popular British TV series such as Sharpe where she played the feisty guerrilla leader Teresa opposite Sean Bean and in Henry VIII, with Ray Winstone, playing the King s first wife Catherine of Aragon. In Spain she was a regular on the country's most popular TV show, Aqui no hay quien viva and in 90 60 90 (Antena 3). In 2011, she plays Vanozza, the mother of Cesare and Lucrezia Borgia, in the series: Borgia, written and produced by Tom Fontana, currently shown in 35 countries.

She was elected to the board of the European Film Academy representing Spain for 6 years and responsible for the organization of the European Film awards (2004) in Barcelona (with a 1.8 million euro budget). Whist living in Los Angeles she was an active member of the Academy of Motion Pictures, Arts and Sciences, serving on the committee for Foreign film. She was the first Spanish actress to be honored with membership to AMPAS and is one of only five living actors to be members in all Spain.

She was elected President of AISGE in 2002. AISGE is the organization in Spain that deals with the task of managing and protecting the intellectual property rights of actors. She was also voted vice-president of ARTIS, the European Association of intellectual property rights for actors. After the release of her first book she began teaching workshops in Universities and Film Schools on the subject of screen-acting. In 2005 founded with Scott Cleverdon first team an international non-profit film foundation. First team has been teaching film acting and the direction of actors in 6 countries around the world and so far has taught more than 1500 filmmakers. ([Link removed - login to see]. Based in Spain, first team offers a pioneering university course on Screen Acting for actors, believed to be the first of its kind in the world and tuition programs for directors and scriptwriters.

Her book, El trabajo del actor de cine was the first to be written in Spanish regarding the craft of film-acting. She followed it up with Monologues in V.O, a resource for auditioning actors. Her third book is currently in the works.

Has had long time relationship with actor Patrick Bauchau.

Replaced Diana Peñalver in the role of Teresa Moreno in the Sharpe series of films when the injury to Paul McGann caused Sharpe's Rifles to be reshot with Sean Bean in the leading role. She went on to star in the first four of the Sharpe films.

Member of the jury at the Venice Film Festival in 2003.

psow voted for an image 1 year, 5 months ago

franceseattle added this to a list 2 years, 7 months ago
Most Beautiful Actresses (326 person items)

franceseattle voted for 8 images [View All] 6 years, 5 months ago