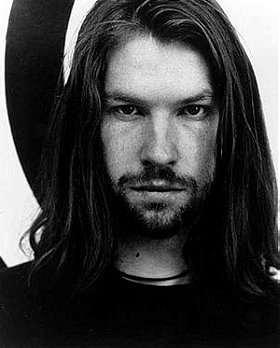 Taken from [Link removed - login to see]
Richard D. James, known by many as Aphex Twin, began his career in the mid 80's composing jungle, industrial, and ambient techno for the U.K. dance scene. He began creating music using custom synths and components. As his early album titles indicate, such as Analogue Bubblebath, he used analog synth equipment to create his sounds.

In the early 90's he shifted from doing dance-ish tunes to more abstract rhythms, using sampled sounds. While the fundamentals still remain in place, his new computer generated tunes have more depth and dimention. The 1996 release of "Richard D. James album" features entirely computer composed music. Songs range from graceful melodies backed by insane drum patterns, such as the "Girl/Boy Song", to raunchy jungle, such as "Peek 824545201", to his singing debut in soungs such as "Beetles" and "Milk Man."

Many of Aphex Twin's early albums appeared under different names, such as Caustic Window and Polygon Window. While his early albums such as Analogue Bubblebath are no longer in print, Polygon Window is still available at many music stores worldwide.

His best works really begin with the album Classics and Selected Ambient Works 85-92 (aka Vol. 1). These two albums are still available in North America on import, which means they'll be costly, but worth it. Classics explores his early analog tunes, many of which are jungle-ish. One of his most well known jungle style dance tracks is "Digeridoo" (track 1 on Classics). The album also features one of the most well known Aphex Twin tunes entitled "Analogue Bubblebath 1." Selected Ambient Works 85-92 is a collection of mellow ambient dance tracks. While I can't explain it in detail, it's worth checking out.

Aphex Twin then released Selected Ambient Works Vol.2. While some praised this as "music for the new milennium" many thought Aphex Twin lost his touch. The album is a 2 disc set of abstract beats and sounds. Have you ever seen the movie "2001: A Space Odyssey"? Remember the sound the monolith made? This album is similar. Not exciting, but some enjoy it.

Following SAW2, Aphex Twin released two maxi-singles (4 maxi-singles overseas), entitled "On" and "Ventolin." On his currently one of Aphex Twin's most famous tracks. On is an ambient tune backed by analog drum beats. The On maxi singles feature some abstract (yet annoying) tracks, but On and its two remixes (by Reload and mu-ziq) are worth the price. Following On came the Ventolin maxi-single (which was divided in two for overseas release). Ventolin is 12 tracks of jungle and ambient-ish tunes, created using odd instruments such as a Casio drum synth. It's not for everyone, but interesting to say the least.

Aphex Twin blew away critics of his SAW2 album with the 1995 release of "... I care because you do." The album featured straight up jungle tracks, such as "Icct Hedral" and "COME ON YOU SLAGS!", ambient grooves, such as "MOOKID" and "Alberto Balsam", and tracks that were somewhere in between, such as "Start as you mean to go on." This album was hailed by many has his best work and recieved rave reviews.

Then came the release of the much awaited "Richard D. James album." This album was a bit of a change, as Aphex Twin chose to use computers almost exclusively to create his music. The tracks are all relatively short (about 3 minutes or so), but sweet. Some beautiful melodies grace the album, such as "4", "Girl/Boy Song", and "Fingerbib." There are no jungle tracks to speak of, but the majority lie somewhere in between jungle and ambient, laced with orchestral sounds. This album also marks the singing deput of Aphex Twin in the songs "Beetles" and "Milk Man." And ya know what? He's pretty good at it, too! It's a wonderful album that shouldn't be missed.

As Richard (Aphex Twin) has admitted, he will continue to use computers to create his future music. Expect interesting things in his future releases including more singing! He has also stated that he plans to release some older tracks, including THE FIRST TRACK HE EVER MADE!, under the old Caustic Window name sometime in the future.

Aphex Twin is a unique artist who somehow manages to walk the tightrope between jungle and ambient while still remaining cutting edge. He is an artist that has a cult following throughout the world, and it's clear why. He creates music that is unique and so different from anything available today. ... (more) (less)
Tags: Electronic (3), Ambient (3), Idm (2), Experimental (2), British (1), UK (1), Techno (1), 90s (1), Hardcore Techno (1), Ambient Techno (1), Acid (1), Richard D. James (1)
My tags:

4. I Care Because You Do

1. The Work of Director Chris Cunningham

1. The Work of Director Chris Cunningham

Meta_Ridley voted for an image 2 years, 6 months ago

whalegaze added this to a list 3 years, 11 months ago
Favorite people (73 person items)

kathy voted for an image 5 years, 7 months ago

Director Black voted for an image 6 years, 6 months ago