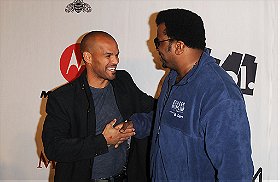 Nolasco has guest-starred in various television series such as Arli$$, CSI: Crime Scene Investigation and ER. His first role on a feature film was in Takeshi Kitano's Brother, along others as "Orange Julius" in Universal's 2 Fast 2 Furious. He then went on to co-star opposite Bernie Mac in Mr. 3000.

Nolasco's additional television and film credits include guest-starring roles on George Lopez, CSI: NY and The Benchwarmers. He also appeared on Mind of Mencia as a guest on Sunday, April 29, 2007. He also starred in the movie adaptation of the Transformers, released during the summer of 2007. Director Michael Bay offered him to return to the sequel Transformers: Revenge of the Fallen, but he declined due to scheduling conflicts. His most high-profile role was Prison Break.

Rachel added this to a list 3 years, 10 months ago
Sexiest Men (652 person items)