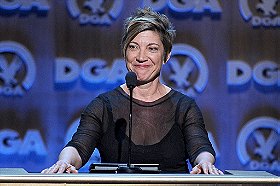 Liddi-Brown received her B.A. in Drama and her M.F.A. in Directing from the University of California, Irvine, where she studied under Professor Keith Fowler. She made her television directorial debut on the first season of the Nickelodeon series, The Secret World of Alex Mack. She then went on to direct episodes for a number of notable television series namely, The Mystery Files of Shelby Woo, Xena: Warrior Princess, Beverly Hills, 90210, Star Trek: Voyager, Even Stevens, CSI: Crime Scene Investigation, CSI: Miami, CSI: NY, Chuck, Grey's Anatomy, Friday Night Lights and Gossip Girl among other series.

powerking14 voted for an image 3 years, 3 months ago

Sam voted for an image 5 years, 2 months ago