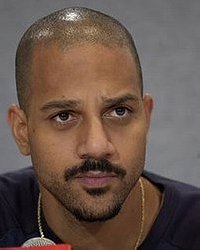 View all Allen Hughes pictures
The Hughes brothers were born in Detroit, Michigan to an African American father and an Armenian American mother, Aida, whose family were Iranian Armenians from Tehran .Albert is the older of the twins by nine minutes; although they originally believed themselves to be fraternal twins , they suspect they may be identical despite not having had a DNA test.Their parents divorced when they were two.
Tags: Director (2), American (1), Male (1), Born 1972 (1)
My tags:

2. Made Men: The 'GoodFellas' Legacy

2. Made Men: The 'GoodFellas' Legacy

5. Knights of the South Bronx
View all Allen Hughes TV

4. Knights of the South Bronx

omnivorousrex added this to a list 1 year, 1 month ago
Tribute...Black directors...Behind the camera (79 person items)