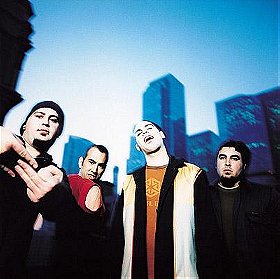 View all Alien Ant Farm pictures
Alien Ant Farm is an American alternative rock band that formed in Moreno Valley, California, United States, in 1995. Their name comes from an idea original guitarist Terry Corso had about aliens and the earth: "that was just my daydream about planet seeding by entities from other dimensions" The band has sold over 5 million units worldwide, and has four studio albums, and eight music videos.
Tags: Alternative (2), Cover (1), Rock (1), Pop Rock (1), Metal (1), Parody (1), Hard Rock (1), Alternative Metal (1), Alternative Rock (1), American (1)
My tags:

2. Spider-Man: Music from and Inspired by

3. Spider-Man: Music from and Inspired by

Queen of Horror added this to a list 2 years, 4 months ago

AnotherD@y added this to a list 3 years, 9 months ago

Sasa added this to a list 3 years, 10 months ago