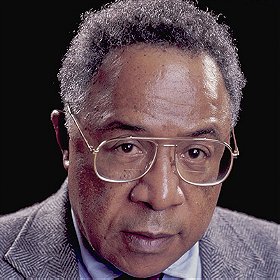 6 votes
Celebrities who served in the military (US/UK) (59 items)
list by SwtChaos
Published 4 years, 9 months ago

In 1976, Haley published Roots: The Saga of an American Family, a novel based on his family's history, starting with the story of Kunta Kinte, who was kidnapped in the Gambia in 1767 and transported to the Province of Maryland to be sold as a slave. Haley claimed to be a seventh-generation descendant of Kunta Kinte, and Haley's work on the novel involved ten years of research, intercontinental travel and writing. He went to the village of Juffure, where Kunta Kinte grew up and which is still in existence, and listened to a tribal historian tell the story of Kinte's capture. Haley also traced the records of the ship, The Lord Ligonier, which he said carried his ancestor to America.

Haley has stated that the most emotional moment of his life occurred on September 29, 1967, when he stood at the site in Annapolis, Maryland, where his ancestor had arrived from Africa in chains exactly 200 years before. A memorial depicting Haley reading a story to young children gathered at his feet has since been erected in the center of Annapolis.

Roots was eventually published in 37 languages, and Haley won a special Pulitzer Prize for the work in 1977. The same year, Roots was adapted into a popular television miniseries by ABC. The serial reached a record-breaking 130 million viewers. Roots emphasized that African Americans have a long history and that not all of that history is necessarily lost, as many believed. Its popularity also sparked an increased public interest in genealogy. In 1979, ABC aired the sequel miniseries Roots: The Next Generations, which continued the story of Kunta Kinte's descendants, concluding with Haley's arrival in Juffure. Haley was portrayed at different ages by future soap-opera actor Kristoff St. John, The Jeffersons actor Damon Evans, and Tony Award winner James Earl Jones.

Haley was briefly a "writer in residence" at Hamilton College in Clinton, New York, where he began work on Roots. He enjoyed spending time at a local bistro called "The Savoy" in Rome, New York, where he would sometimes pass the time listening to the piano player. Today, there is a special table in honor of Haley with a painting of Haley writing "Roots" on a yellow legal tablet. ... (more) (less)
My tags:

3. Roots: The Next Generations

4. Roots: The Next Generations

2. Alex Haley's Queen: The Story of an American Family

2. Hugh Hefner: Once Upon a Time

3. Hugh Hefner: Once Upon a Time