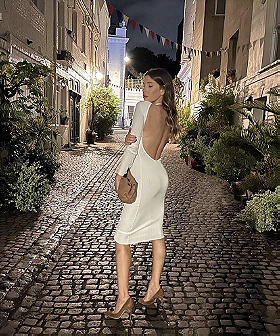 17 votes
View all Alessia Marcuzzi pictures
Description: She is a TV presenter, actress and Italian model. Born and raised in Rome by Antoinette and Eugene, began his television career in Telemontecarlo, where he initially led the show retail Beware in 1991, and then take part in the 1991/1992 season, the sports program Here you play with Jose Altafini, which provided some statistics of the football league in progress, and played the role of little valley. Also on Telemontecarlo, since March 1992 he took part in the program for boys Friends monsters and in 1992/1993 season led along with Umberto Smaila the variety Ninety-Three. In 1994, shortly before landing on Mediaset (a comp She is a TV presenter, actress and Italian model.

Born and raised in Rome by Antoinette and Eugene, began his television career in Telemontecarlo, where he initially led the show retail Beware in 1991, and then take part in the 1991/1992 season, the sports program Here you play with Jose Altafini, which provided some statistics of the football league in progress, and played the role of little valley. Also on Telemontecarlo, since March 1992 he took part in the program for boys Friends monsters and in 1992/1993 season led along with Umberto Smaila the variety Ninety-Three.

In 1994, shortly before landing on Mediaset (a company in which then spend most of the later career), he made a brief appearance on RAI alongside Gigi Sabani in The big game of monopoly, aired on Rai 2. in the same year he made his debut as an actress: in fact participated in the making of the film Chicken Park of Jerry Cala, in a brief cameo, and the same year she appeared, directed by Furio Angiolella, in the film Between us everything is over . As of November 1995, passed in Mediaset, where she was entrusted with the conduct of the people show Thunderbolt, aired on Saturday afternoons on Italy 1; the program had an excellent response from the public, then being inserted, as of February 1996 in the afternoon of 1 Italian weekday schedules, so going on air from Monday to Friday. [4] Since she led for two editions up June 1997, thunderbolt was the program that he consecrated as the new face of success of Italy 1, the network of predominantly young target audience, allowing her to land in several flagship programs of this channel in the following years. [ 5] in the summer of 1996 he made his debut in the conduct of the event known song Festivalbar, which he led for seven editions, until 2002; flanked in 1996 by Amadeus and Corona, the following season was joined by Amadeus, Simona Ventura and Elenoire Casalegno; 1998-2000 led in pairs program with Fiorello, while in 2001 he collaborated with Daniel and Natasha Bossari Stefanenko (the latter, in the latest edition co-conducted with Marcuzzi, was replaced by Michelle Hunziker). Iin 1997 he led, along with Paolo Brosio, the show 8 mm clip, while the following season and until 1998 led to another show in the afternoon of Italy 1, Fuego !, in which she collaborated with Francesca Fogar. [5] Marcuzzi has returned to film in 1998 with My West by Giovanni Veronesi, while in 1999 there back again because starred in All the men of the deficient, a comedy of Responded Band, the famous comedy trio with whom he collaborated in those years. In 1999 he debuted as a television actress with the film for television a dog and a policeman (aired on Italy 1), from which it was later fiction is Tequila & Bonetti (aired on Italy 1 in 2000), which he was starred with Jack Scalia. For two seasons, from 1998 to 2000, he led, along with Ellen Hidding and Responded Band, the first Italian program Mai dire goal.

They have aroused particular interest some calendars to her from the turn of the nineties and two thousand years, including those published by the magazine Max in 1998, of which over 680,000 copies have been sold, and the weekly Panorama in 2000 getting, well, a lot of success with both; later in 2004 also posed for a "ironic calendar" published by Maxim along with the entire cast of the program Reservoir Dogs. In 2000, he lent his voice all'iguanodonte Neera in Disney film Dinosaur.

In June 2000 Marcuzzi recorded with Paola Barale zero episode of the variety of Italian Macchemù 1, then made after the summer break in a complete set with run only from Barale, so without the presence of Marcuzzi. [9] Another program important for the career of the presenter was Reservoir Dogs, the program that led happening to Simona Ventura from 2000 to 2005; during this time the show conceived by Davide Parenti was promoted from second to first night (with the title Reservoir Dogs Show). [10] In the early years of this decade has led several television events, in addition to its latest editions of the Festivalbar Italy 1; in the years 2002 and 2003 led the Telegatto ceremony, broadcast in prime time on Channel 5, [11] and again in 2003 he conducted the Gala of advertising along with Heidi Klum, in ever aired on Channel 5. [12 ] in October 2003 he conducted on Channel 5 (with Gerry Scotti, Claudio Bisio and Michelle Hunziker) the variety-event the factory of smiles, which aired for two episodes in prime time with the purpose of promoting the eponymous campaign charity through which viewers could, in different ways, make donations. [13] Between 2004 and 2006 she starred in the series of Channel 5 Carabinieri for three seasons, from third to fifth. In May 2007, he starred in the second season of fiction Channel 5 The court Mastrangelo 2, and April 21, 2009 was the star of the television movie A love witch alongside Peter Dale.

Following a successful edition of Joking aside, which she carried in prime time on Channel 5 along with comedians Diego Abatantuono and Massimo Boldi in the winter of 2005, [14] has finally abandoned Italy 1 to switch to Channel 5, in as of 2006, the period when it was chosen to replace Barbara d'Urso in the Channel 5 Big Brother of the famous reality show run, debuting at the helm of the program January 19, 2006 leading the sixth year and remaining at the helm of the program even in the later issues with the "quarterly format", ie in the seventh (in the winter wave of 2007), eighth (in the winter wave of 2008) and ninth (in winter 2009 wave).

In the 2009/2010 season he conducted on Channel 5, the tenth edition of Big Brother in the new six-month format (that is, from October to March) instead of the previous format based on quarters (ie from late January to early April) that had been used 2006-2009 again with conducting Marcuzzi. Also in the 2009/2010 season, he starred in the first season of the sitcom Italy 1 Cosi fan tutte, which was Marcuzzi starred with Debora Villa. In the 2010/2011 season Marcuzzi conducted on Channel 5 the eleventh edition of Big Brother, always with the aforementioned half-year format. In the season 2011/2012 Marcuzzi starred, always in the lead role along with Debora Villa, in the second season [15] of the sitcom Italy 1 Cosi fan tutte and led the twelfth edition of Big Brother on Channel 5, with the latest edition format Half-yearly: once the docidicesima edition, in April 2012 Big Brother has been suspended due to the heavy decline in ratings and some controversy.

In May 2012 records the first edition of Extreme Makeover: Home Edition Italy, program that helps families with economic problems ristrutturandogli their home: the two episodes were broadcast on 23 and 30 January 2013 on Channel 5 with a fair success public; in the summer of 2013 records the second edition consists in four episodes that have aired in June 2014. In July 2013 leads on Channel 5, the first edition of the Summer Festival together with Angelo Baiguini and Simone Annicchiarico flanked by Andrea sent Dianetti and Diana Del Bufalo . In autumn 2013, namely from 11 November [16] to 17 December [17] Marcuzzi is part of the fixed panel, along with Silvia Toffanin and journalist Cesare Cunaccia, the first edition [18] of the talent show dedicated to fashion Fashion Style and conducted by Chiara Francini of the 5 prime time. [18] in the spring of 2014 returns to lead Big Brother on Channel 5; in this thirteenth edition of the quarterly returns to the original format, but this time in a different location, with a modified game format and updated with the interaction on live television with the various social networks, with new opinion leaders (ie Cesare Cunaccia, Manuela Arcuri and Wladimir Luxuria) instead of Alfonso Signorini (which occupied that role from January 19, 2006) and especially with a new home for the competitors, thereby obtaining good results with the critics and the public. In July 2014 it leads on Channel 5, the second edition of the Summer Festival accompanied [19] by Rudy Zerbi and Angelo Baiguini. In autumn 2014 Marcuzzi is one of the "conductive rolling" of the seventeenth edition of Zelig on Channel 5 getting good consensus from the public and the critics. [20] In the winter of 2015, namely from 26 January to 23 March, Marcuzzi leads on channel 5, the tenth edition of the island of the famous, the reality show for the first time landed on the Mediaset networks, supported by opinion Alfonso Signorini and Mara Venier. In July 2015 Marcuzzi, flanked by Rudy Zerbi and Angelo Baiguini conductors for the second consecutive time, leads on Channel 5, the third edition of the Summer Festival. In autumn 2015 leads the fourteenth edition of Big Brother on Channel 5 with some innovations like new commentators Claudio Amendola and Cristiano Malgioglio, the new game mechanism reminiscent of the French format Secret Story (a spin-off of Big Brother French which it is based on the input in the house of a person or a couple with a secret that other competitors have to find out by the next evening episode worth the deduction of prize money, while the person or couple with a secret is to avoid getting caught otherwise the non-award of the reduced premium to other competitors and the expulsion from the house), and the new study. From March 2016 it will return to lead The island's famous.

LGBT voted for an image 1 week, 4 days ago

Look Left voted for an image 3 weeks, 4 days ago

Satrapo posted a image 2 months ago

Maria Farioli voted for an image 2 months, 2 weeks ago

Maudea96 added this to a list 2 months, 3 weeks ago
Italian women (287 person items)

teriandliz voted for an image 3 months, 2 weeks ago

Ristorante Italiano voted for 20 images [View All] 5 months, 1 week ago

Silvio Berlusconi voted for 20 images [View All] 5 months, 3 weeks ago

Palermo Sicily voted for an image 6 months, 2 weeks ago

La dolce vita sexy voted for an image 7 months ago

Sanpellegrino voted for 20 images [View All] 7 months, 2 weeks ago

looksharp voted for an image 8 months ago