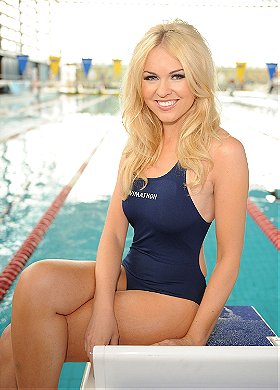 Salmon was born in Bangor, County Down, Northern Ireland. She attended Kilmaine Primary School and Glenlola Collegiate School while growing up in Bangor, a town on the east coast of Northern Ireland which she says is her "favourite place.... It's a really pretty seaside town with a marina which is lovely in the summer". She then attended Queen's University, Belfast, where she gained a 2:1 degree in law, before qualifying as a solicitor. She was crowned Miss Northern Ireland in 1999 (beating future Big Brother contestant Orlaith McAllister). In 2009 she was placed at number 20 on FHM's 100 sexiest women.

Salmon was revealed as the 30th Blue Peter presenter on 25 October 2004. She first appeared on the show on 23 December 2004, in its Christmas special. She was originally meant to replace Liz Barker when the latter left on maternity leave; however, Barker had already returned by the time Salmon made her debut. She presented the show with Konnie Huq, Simon Thomas, Matt Baker, Liz Barker, Gethin Jones and Andy Akinwolere.

Shortly after her debut, she famously said "I'd Try Anything Once", which started a trend in her being asked to do dangerous or embarrassing things including wing-walking on top of an antique biplane and stamp collecting. When she mentioned in her blog on the Blue Peter website that she had an ambition to be sawn in half by a magician, viewers started a campaign for her to do a challenge where she would become a magician's assistant. This campaign was successful, and Salmon filmed a challenge where she assisted a magician with a number of illusions including levitation and a transposition illusion called "The Assistants Revenge". After the filmed segment of the challenge had been shown, the magician joined Salmon in the studio for a live performance of the sawing in half illusion, in which Salmon was sawn in half inside a clear-sided box in a version of the illusion called "Clearly Impossible". Salmon left the show in June 2008 at the start of the Summer break, at the same time as Gethin Jones. ... (more) (less)
Tags: British (1), England (1), Hot (1), 1980 (1), Beautiful (1), Blonde (1), Hawt (1)
My tags:

LRDVDR voted for an image 2 weeks ago

3DoctorWho voted for an image 2 months ago

derreckmark voted for 2 images 2 months ago

LRDVDR voted for an image 2 months, 1 week ago

3DoctorWho voted for 6 images [View All] 2 months, 2 weeks ago

derreckmark voted for an image 2 months, 2 weeks ago

chuckbb voted for an image 3 months, 1 week ago

Crazytone18 voted for an image 4 months, 1 week ago

mychaloh voted for an image 10 months, 1 week ago

Rodimus added this to a list 1 year, 5 months ago

Rodimus added this to a list 2 years, 8 months ago

Tigerrr-777 posted a comment on this image 3 years, 11 months ago

TrekMedic voted for 2 images 4 years ago

sahaad voted for 7 images [View All] 4 years ago

sahaad voted for 9 images [View All] 4 years ago